From StrategyWiki, the video game walkthrough and strategy guide wiki
< Transformers: War for Cybertron
Jump to navigation Jump to search

In this chapter, Megatron will attempt to retrieve the Omega key from Zeta Prime. He is supported by Soundwave and Breakdown.

At the start, enemy autobots will attack from a long range from across the river. These enemies will take cover behind a shield, and should be attacked between rounds. When they are defeated, you can head through the door behind the autobots.

The first room has an ambush, with autobots attacking from the sides. Again, defeating them will allow progress outside, where you witness an autobot dropship crashing into a building.

The entrance to the stellar galleries will have snipers in addition to a few enemies on ground-level. After eliminating the defenders, Megatron will blast open the locked door, and there will be a few autobots defending the path to the security pillar in the later room. 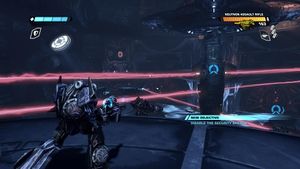 The security pillar room has a damaging floor, along with a central pillar that spins laser beams around the room, along with an electrified floor. The beams can be jumped over easily, with the difficulty being the long jump required to the other platforms in the room. In addition, there are turrets that will appear on the wall, most likely by the time you reach the other side of the room.

In this room, you and your companions need plant dark energon charges on three of the consoles. The consoles themselves provide code from the beams, but not from the turrets that appear. When the consoles are claimed, the security system (including electric floor) are deactivated.

The exit is on the ground, to the back.

In the following corridor, there are two overshielded autobots and three turrets to the left. The door unlockes after defeating them.

The next room contains the omega key. After collecting any desired pickups, ascend the ramp and use the console to unlock the key. However, Zeta Prime has already taken it away, and warns Megatron not to continue. He also springs an ambush.

The ambush consists of a large number of flying enemies. Some of them may land, requiring you to engage enemies above and blow at the same time.

When all the flyers are downed, one of the doors at ground level is blasted open, with two last autobots attacking.

Proceed to the Lower City[edit]