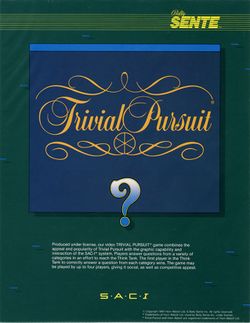 Trivial Pursuit is a quiz arcade game that was released by Bally and Sente in 1984; it was the last of that original batch of eight games to run on their SAC-I hardware, and is based on the board game of the same name. The players must take control of four people, whose names are parodies of those of the people they're caricaturing: "Baron Von Rightoften" (Baron Von Richthofen), "Billie Genius" (Billie Jean King), "Cleofactra" (Cleopatra), and "Smartacus" (Spartacus) - at the start of the game, each of the players must press the green (right) button if they want to move clockwise round the game board or the red (wrong) one if they want to move anti-clockwise; a die at the bottom of the board randomly determines how many spaces each player moves and the type of space they land on determines the category of question they have to answer. A question from that category will then be displayed in the centre of the board, with an answer, and the text of "Right or Wrong? You Decide." below it - and the first player who can answer one question from all four of the categories correctly shall win the game.

There were six different versions for this game: Genus I, Genus II, Baby Boomer, Young Players, All-Star Sports, and Spanish; three of them were later ported for play on the Sinclair ZX Spectrum.