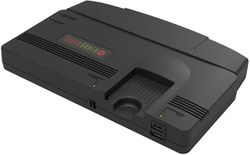 The TurboGrafx-16 Mini, known as the PC Engine Mini (PCエンジン mini) in Japan and PC Engine CoreGrafx Mini in Europe, is a dedicated home video game console by Konami modeled on NEC's TurboGrafx-16, which was designed by Hudson Soft. The Mini emulates the original console's 16-bit hardware. The Japanese model contains 58 games total while the international models contain 57. The Mini was released worldwide on March 19, 2020, and is sold exclusively through Amazon.

A total of 60 titles were announced between all regions for the Mini, 54 of which are unique games. Konami lists the titles either under the category of "TurboGrafx-16" for the American games or "PC Engine" for the Japanese games; though this listing is heavily simplified as TurboGrafx-CD/CD-ROM², Super CD-ROM², Arcade CD-ROM² and SuperGrafx titles are also included on all regions of the Mini.