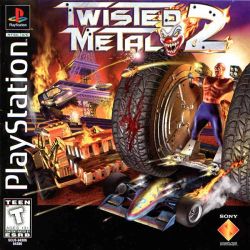 Twisted Metal 2 (known in Europe as Twisted Metal 2: World Tour and Twisted Metal EX in Japan) is the second and most successful game in the vehicular combat Twisted Metal series. It was developed by the game studio SingleTrac, published by Sony, and released in 1996 for PlayStation and Windows.

The PC version features slightly cut-down graphics compared to the PlayStation version (minor details of some levels disappeared) but it doesn't require a 3D accelerator video card and plays well on weak descendants. It also features multiplayer mode over a modem line or Internet.

Two years after its release, Twisted Metal 2 was re-released as a Sony Greatest Hits game. A similar title was released in Japan in 2007. On November 1, 2007, it was also released for download in North America on the PlayStation Network.

In concept, Twisted Metal 2 is a demolition derby which permits the usage of ballistic projectiles. Players choose a vehicle and an arena – or a series of arenas in the story mode – to engage in battle with opposing drivers. A variety of weapons are obtainable by pick-ups scattered throughout the stage. The objective of the game is to be the last remaining player.

The story follows up from the first game, having a man named Calypso host a vehicular combat tournament called Twisted Metal, which grants its winner a single prize: anything he or she desires. There is a general "be careful what you wish for" theme, as many of the contestants wind up with not-so-happy endings.

The plot is set a year after the first game, but instead of the city of Los Angeles being the arena of the contest (which was left in ruins by the previous 10 Twisted Metal tournaments), cities from all over the world are used.