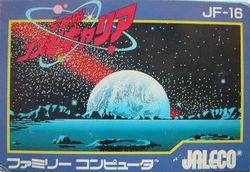 Uchuusen Cosmo Carrier is an outer space shooter for the NES. It was developed by Jaleco, and only published in Japan near the end of 1987. At first glance, it appears to be a behind-the-cockpit space shooter, but in fact, it is a complex space adventure game that has the player piloting around the solar system in an effort to collect six parts needed for an ultimate weapon, the photon missile, in order to put an end to the plans of a battle planet that seeks to wipe out earth. Players must discover landing points on various planets and moons, in order to explore them in various kinds of mechanical exploration suits to locate the weapon parts. The game is very menu driven, although there are some action sequences. Uchuusen Cosmo Carrier was only released in Japan, and never translated from Japanese to any other language.

One of Nostradamus's predictions became a reality in 1999: the moon departed from its orbit abnormally, and began to approach the Earth. Around the same time, a mysterious group of spaceships came flying into the solar system and a mechanical "planet" was situated just outside of Pluto. This "Battle Star" was behind the manipulation of the moon's orbit. It is calculated to crash into the Earth in roughly three months, and if this happens, the human race will be destroyed.

However, information soon became available that the invading force which entered the solar system had the technology to build a massive super weapon with immense destructive power, known as a photon missile. If such a missile were to be fired at the Battle Star, it would be obliterated. A Defense Force was created as the last hope of the human race. It would pilot a spaceship just nearing completion known as the Cosmo Carrier. You are the commander of this ship. Your duty is to discover this mysterious super weapon, and use it to destroy the Battle Star.

Hurry Cosmo Carrier. The human race has less than 100 days of survival left. 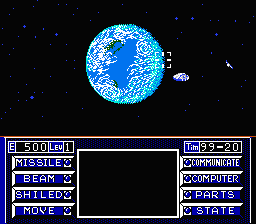 While piloting the Cosmo Carrier, you will see the command panel of the ship in front of you. There two displays at the top, and eight different options split into two groups of four on either side of the information screen.

The purpose of the game is to collect all six hidden parts of the photon missile while engaging enemies in combat around the solar system. Your ultimate goal is to blast the planet-like fortress known as the Battle Star with the Photon Missile.

The game is divided up into several areas, including Earth, Mars, Jupiter, Saturn, Uranus, Neptune, Pluto, and the Battle Star area. To move between each area, you must target the neighboring planet with the cursor, engage the Move command, and select Warp.

When starting out, you should communicate with all of the neighboring craft,whether they are hostile or friendly, to gather information about planets and landing location. Don't be too hasty to attack, as you cannot proceed without this information. Only after you have interrogated an enemy ship should you attempt to destroy it.

You should attack with a beam until you understand the strength of your enemy, It is useful to examine a crafts offense and defense with the computer. Then you can tailor your attack and the amount of energy you spend on it by switching to Missiles.

You should return to Earth whenever your energy begins to run critically low, if the Cosmo Carrier has suffered extensive damage, or one of the exploration command suits break. Your energy will be replenished and repairs will be performed. You can also obtain a password while orbiting around earth.

Command suits are large humanoid robots that stand 18 meters in height. There are three different suits that you can utilize for exploration on planetary and lunar surfaces, each with different strengths and weaknesses. When landing on an enemy base, you must choose which suit you plan to utilize.

In general, you should choose the Field suit unless you are visiting Saturn (Gravity suit) or Pluto (Blizzard suit). The range at which the cursor can move with respect to the suit varies according to suit type.