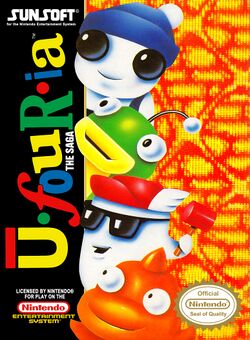 Ufouria: The Saga, known in Japan as Hebereke (へべれけ, Hebereke?), is a 1991 action-adventure game, developed and published by Sunsoft for the NES. It is the first game in the Hebereke series and it gave rise to numerous sequels. It was released in Japan on September 20, 1991, in Europe on November 19, 1992. The game was then re-released in 2002 in a two-in-one Sony PlayStation game, Memorial Series Sunsoft Vol.5, which also included Rough World.

The player can control up to four different creatures, one at a time, each with their own abilities. The game does not feature a subdivision by levels, but a single explorable world, along the lines of Metroid and Blaster Master. The player must orient himself in this world, killing the enemies he finds in his path. As the adventure progresses, the player becomes able to access new areas, finding new characters and collecting power-up items, usually guarded by bosses. The game sports bright characters and graphics that are typically Japanese in design. In the PAL version of the game the story and the names of the characters have been changed. Their design has also been changed: Bop-Louie, from a penguin, has become a kind of snowman with clothes, while Freeon-Leon, from a cat, has been changed into an orange dinosaur.

The game is equipped with a password system, which can be consulted at any time, which allows the player to stop and restart the adventure while keeping all the objects obtained up to that moment, but starting over from the initial area. A complicated and frustrating system, which still works. After you finish it, the game offers no further challenges.

Bop-Louie, Freeon-Leon, Shades and Gil are four creatures belonging to different species, living in a fantasy world called Ufouria. One day the four friends, during an exploration, find a mysterious crater with an object similar to a crystal in the middle. Freeon-Leon, Shades and Gil try to reach the shiny object, but the ground collapses under their feet and the three fall into the crater. Bop-Louie carefully drops into the crater to help them and finds himself in another world, strange and hostile. The player controls Bop-Louie during his rescue mission. Bop Louie must find his three friends, who, however, have lost their memory during the fall and see him as a threat. He must therefore fight with them to restore their memory. After reuniting the group, the four friends must find a way to go back home. To do this, they will have to use the powers and special abilities of all four. The player has in fact the possibility to choose at any time which of the four friends to enter into action, after having found them. It is also revealed that the goal is to find three magical keys and a big gate, which could allow them to return to Ufouria.