Go back and let yourself fall into the small precipice you will encounter. Proceed to the right, returning to where you got the Crystal. This time take the path that goes underground. Lower yourself down using the rope. Proceed to the left (on the right you would not go very far) until you meet a pool of water. It's time to put your new ally Freeon-Leon into action. Select him from the sub-screen. Kill the duck by jumping on its head and swim across the water. On the other side, use the rope to go down to the bottom of the chasm and proceed to the right to meet the first real boss of the game.

This first boss just walks back and forth around the room. To defeat it you will have to jump on the boss's head to make it spit a ball, pick it up and throw it at the boss to hurt him (note: it is not enough to jump on the boss's head to injure it). Then, repeat the process. This is the standard strategy for defeating the game's bosses, with some exceptions that will be duly reported. If you're still controlling Freeon-Leon, switch to Bop-Louie from the sub-screen to take advantage of his increased jumping ability. You will notice that as you hit it, the boss will get faster, but it shouldn't bother you. However, be careful not to get hit, or you will lose 5 life points. When you hit it 5 times, the boss will die and you can proceed to the right. You'll find a chest containing Bop-Louie's special weapon. It is advisable to use special weapons only when strictly necessary, as enemies defeated in this way leave no balls or crystals.

Go all the way back until you get back to where you got the Crystal and proceed to the right. You will enter an ice cave. You will need to use Freeon-Leon in this cave, because Bop-Louie on the ice would fall all the time. All you have to do here is to proceed to the right by defeating the enemies that you will find in your path. Jump over the two small precipices you will encounter (you will be able to explore these areas later) and continue to advance until you exit the cave. 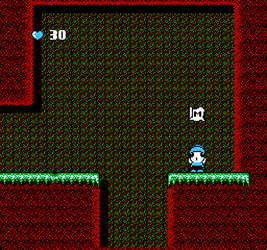 You will find yourself in an area with brown earth walls. An arrow will prompt you to go down: follow the advice. Kill the frogman you will find on the bottom by jumping on his head twice and proceed to the right. You will find yourself on the edge of a precipice. On the other side there is a chest. Kill the flying enemy with Bop-Louie's special weapon and jump over the precipice to get the chest. Inside you will find the Map, which will allow you to orient yourself in the world of the game. In truth, the map will be of no use to you until you find the Compass that will indicate your position, but do not worry, you will find the Compass soon. When you are done, let yourself fall over the precipice and get ready for a very long fall. As you fall down, hold down the down button so you don't get hurt by flying enemies. At the bottom of the chasm you will find a springboard that will allow you to go back up (do it in case you have failed the jump and you have not managed to take the chest) and two new paths, one to the right and one to the left. Take the path on the left, as on the right you will be stopped after a few steps by a brick wall. 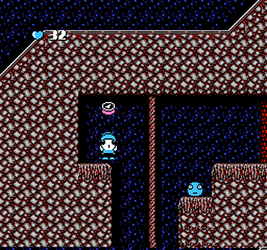 You will enter a mine-like area. This area is wider and more labyrinthine than those you have crossed so far, so at first you may feel disoriented. You will also notice some rails on the ground and some carts. If you get on a cart, it will keep moving until it reaches an obstacle. You will have to proceed to the left, go down the rope and take the first passage on the left that you will encounter. Continue to proceed to the left, crossing the precipice you will encounter and the waterhole, using Freeon-Leon. At the bottom you will also notice a chest, which you cannot reach for now. Climb the rope and in the upper left corner you will find a chest with the Compass, which will allow you to see your position on the map. Then proceed always to the right, crossing the precipice and another pool of water. Climb up the rope and jump into the cart you will find. The cart will move to the left. You will pass over a pool of lava, with some enemies floating and a door after them. Don't get off! You are not yet able to access that area. Among other things, behind that door there is only the Red Ring, a non-essential object to finish the game. Stay in the cart. When the cart ends up on a precipice, quickly jump to the left, taking the passage you will find. From this point the path will be much more linear. Keep going, climbing the ropes and defeating the enemies you encounter. Eventually you will meet the second of your friends, Shades, who will attack you. 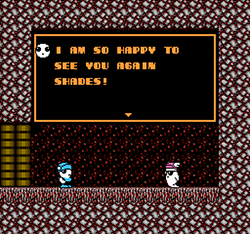 The duel with Shades is exactly the same as the duel with Freeon-Leon. You will have to hit him 8 times with the ball, avoiding being hit in turn, to clear his head. Nothing complicated. When you defeat him, Shades will regain his memory and join you. He will also mention a big gate in a temple, which you will need to find in order to go back home. Don't think about it for now, there are still thousands of things to do first.