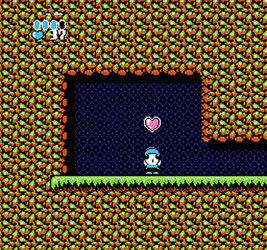 Proceed to the right taking down the brick walls with Gil's bombs. You will now have to climb to the point where you found the rock that allowed you to stop the waterfall. Once here, drop into the void on the right, while staying close to the rock face on the left. You will land on a ledge with a tunnel to the left. Enter the tunnel, using Gil's bombs to knock down the small wall and on the left you will find a chest with the last Life Container. Go back outside, drop down and climb again, until you get back to where you jumped off. This time switch to Shades and take a long jump to the right. You will land on a platform with a door. Go inside and get ready to fight another boss.

This alien-like boss is particularly tough. The battle is divided into 2 phases. In the first, the boss will attack you aboard his spaceship, moving up and down the room. Be careful not to get hit, or you'll lose a lot of life points. You will have to defeat the little aliens that the boss will drop to get a ball. Pick it up and throw it at the boss, without getting hit in turn. You will have to hit its head, not the spaceship to damage it. On the fifth hit the spaceship will break and the boss will start running back and forth around the room in its spacesuit. All you have to do now to damage it is jump on its head, but it's not that simple. In fact, every few seconds the boss will become invisible for a few moments and you will have to memorize its movements well in order not to be hit. You'll also need to beware of its laser gun, which thankfully doesn't do much damage. Jump on the boss's head 8 times to eliminate it permanently and you will have conquered also the Red Key, the last one. 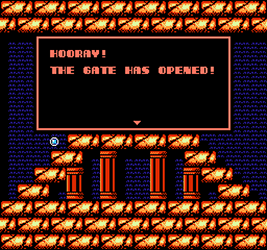 If you have all three keys, the Temple Gate will open

Now that you have all the keys, you can travel around the world to pick up items you may have missed before, such as Medicine and Life Containers. When you are finally ready, go to the temple. If you are ready right now, to reach the temple from here, just drop to the right and take the passage on the right higher up. Once in the temple, reach the large gate in the center, which will finally open. Unfortunately, if you thought you could safely return to Ufouria once you crossed the gate, a nasty surprise awaits you. You'll have to deal with a giant final boss before you see the game's ending, so prepare accordingly. If you are low on life points and haven't used the Water of Life yet, now is the time to do it. 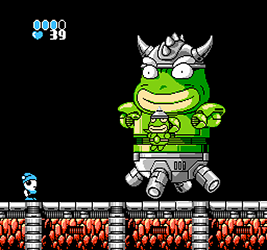 Once through the gate, you will find yourself in a dark room and a huge green boss will appear in front of you. The boss will attack you by throwing a robot similar to a small version of itself that it carries attached to its belly. Its attacks are not too difficult to avoid, but be very careful. If the boss hits you, it will take 15 life points from you! When the boss attacks you, jump on the puppet's head to make it spit a ball. However, if you try to simply throw it at the boss you will not get any results. You will notice that when the boss attacks you, it discovers a red spot on its belly, behind the puppet. That's where you'll have to hit it. You will then have to jump onto the puppet's head to get a ball, pick it up and throw it at that red spot when the boss attacks you again. Then, repeat the process. Hitting the boss without getting hit yourself isn't easy, it requires attention and timing. When you hit it 8 times in its weak spot, the boss will die and you can see the ending of the game. Congratulations! 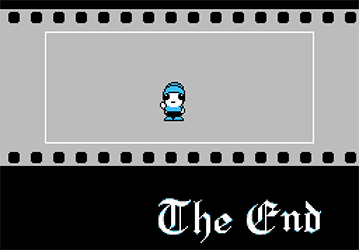 Go to top
← The second key | The last key and ending | Ufouria: The Saga →