From StrategyWiki, the video game walkthrough and strategy guide wiki
(Redirected from Ultima: The False Prophet)
Jump to navigation Jump to search

Ultima VI: The False Prophet was the first Ultima game to be developed primarily for MS-DOS (previous games were developed for Apple II and later ported to other systems). It takes full advantage of the hardware with 256-color VGA graphics and the first use of the series' unusual perspective.

A Super Nintendo version was produced. The title was not numbered, because it was the third Ultima game released in Japan by Nintendo. There were many minor changes, but on the whole it is still the same game, unlike other Ultima games ported on Nintendo consolles.

In 1991 Fujitsu Japan released a version of Ultima VI for the Japan-only FM Towns, what was at the time a considerably advanced PC. It was Origin's first CD-ROM game, and features fully digitized speech for all characters (in English!) many of which are voiced by their real-world namesakes (Richard Garriott voices Lord British, and so forth).

The New Ultima 6 Engine (NUVIE) supports the FM-Towns voiceovers, but it still requires the MS-DOS version as the base. 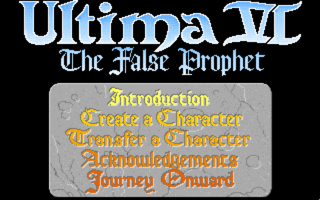