Ultima I: The First Age of Darkness

From StrategyWiki, the video game walkthrough and strategy guide wiki
(Redirected from Ultima 1)
Jump to navigation Jump to search

Ultima I: The First Age of Darkness | Table of Contents | Gameplay | Walkthrough 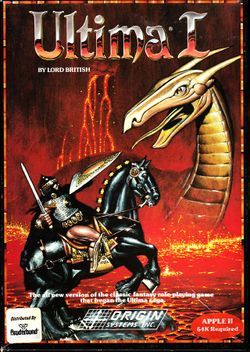 Ultima I: The First Age of Darkness

Ultima, later known as Ultima I: The First Age of Darkness, Ultima I: The Original, or simply Ultima I, is the first title in the Ultima series of computer role-playing games. It was originally developed for the Apple II computer, and first published in the United States by California Pacific Computer Company, September 2, 1980. It was later ported to the Atari 400/800 computer and released in 1982 by Sierra Online. In 1986, the game has been completely re-coded by Origin Systems and ported to many different platforms. The 1986 re-code of Ultima is the most commonly known and available version of the game.

The game follows the endeavors of the stranger in the task to defeat the wizard Mondain, which involves progressing through many aspects of game play, including dungeon crawling and space travel.

The game was one of the first definitive commercial computer role-playing games, and is considered an important and influential turning point for the development of the genre throughout years to come.

Over 1000 years ago, Mondain the Wizard [tried to] create an evil gem. With this gem, he [would have been] immortal and [could] not be defeated. The quest of Ultima is to traverse the lands in search of a time machine. Upon finding such a device, thou should go back in time to the days [when] Mondain [was creating] the evil gem and destroy him! (from in-game conversation)

The story of Ultima I revolves around the evil wizard Mondain and his rule over the kingdom of Sosaria. According to the game's back story, Mondain tried to create an evil gem over 1000 years ago that would have granted him immortality. Luckily, he was defeated by a time traveler before he completed his plan.

Since then, Mondain's monsters and beasts have been released upon the land; they kept ravaging the villages and towns of Sosaria and caused most of the nobles to bicker amongst themselves. In order to fulfill what actually happened 1000 years before, Lord British searches for the time traveler who did bring about the wizard's end. This call is answered by the Stranger (the player character).

The majority of the game is spent searching for a time machine, and a way to activate it. Four of the lords in the game, one from each realm, hold a gem that will allow the time machine to work once all four gems have been found. In exchange for the gem, the lord will ask the player to complete a quest that involves travelling into a dungeon and killing a specific creature. Once this has been achieved, the lord will hand over his gem.

The time machine itself also needs to be found. Purchasing a space shuttle and travelling into outer space is a prerequisite of this: the Stranger must become a space ace, by destroying twenty enemy ships, in order to complete the game. Once this task has been completed, rescuing a princess will reveal the location of the time machine. The Stranger will then travel back in time and face Mondain before he has completed the gem of immortality.