Characters in Ultima III have several features that affect gameplay. Like its predecessors (but unlike later Ultima games set in Britannia) Ultima III allows the player to choose from several different races. In this game, the playable races are humans, dwarves, elves, bobbits, and fuzzies. It was the last main Ultima game to do so. Ultima III also allows each character to have one of three genders: male, female, or "other".

Characters have health points that determine the maximum number of damage they can receive, and magic points, that determine the spells they can cast. Even though the documentation mentions reagents, that is only background information. In the game, the only limitation to cast a spell is to have enough magic points to cast it. Better spells need more magic points. There are two types of magic in the game: sorcerer spells and priest spells, each having sixteen spells. For more about magic, see the Magic page.

Experience and levels are only useful to determine the maximum number of health points a character has, for the first time in the Ultima series. Experience is obtained by killing monsters. One hundred experience points (xp) are needed to go up one level. Levels are given by Lord British after gaining enough experience points. Lord British will increase the maximum health points for a character to (100*current level) plus 50. However, Lord British will only advance players to level 5. Only after getting the Mark of Kings will he advance up to level 25. After level 25, there is no effect for getting more experience or reaching further levels.

Characters in this game have four attributes or stats: strength, dexterity, intelligence and wisdom. The race a character has affect the maximum value each of the attributes can be raised to. Strength modifies the damage done by a character; Dexterity changes a character's chance to hit and avoid attacks and traps; Intelligence and Wisdom affect the magic points, either for sorcerer or priest spells, respectively.

The following table shows the maximum values each race can have in each of the four attributes:

Attributes are gained by going to Ambrosia and donating at the Shrines of Truth. Each shrine raises a specific attribute, and each multiple of 100 gold donated will raise the respective attribute by one point.

Ultima III allows the player to choose from eleven professions for each character. Different professions allow for different restrictions on weapons and armor, plus other special characteristics. Each class is influenced by the four primary classes (Fighter, Cleric, Wizard, and Thief), either entirely by one, or partially by multiple classes. The following diagram and table shows the characteristics of each profession.

In the Best Weapon and Best Armor columns, the letters correspond to the armors in the game menus/commands. In alphabetical order, weapons and armors go from weakest to strongest. The letters in the Steal and Magic columns have been introduced here following the same logic.

The character class triangle (below) summarizes the characters according to their attributes: 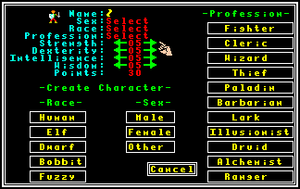 When creating a new character, the following steps have to be done (See Gameplay for more a detailed description):

Up to 20 characters can be created and stored at the same time, and parties can be formed by selecting four characters from that roster. Parties can be dispersed and re-formed even in the middle of saved games, before loading a game.

Note the pluses and minuses of each player type. For instance, either a Bobbit or Fuzzy would be a good druid, because the druid's magical ability is based on half of the mental skill (wisdom/intelligence) you have more points on. Druids recover magic points twice as fast as other players, which is handy when you need several cure spells quickly. The advantage of Rangers is the powerful weapons they can use and their limited bonus to steal & disarm chests; their weakness is in their magic ability. A Dwarf or Elf would make a bad Ranger because either would have a maximum of only 25 magic points.

The NES port of Ultima 3 has the option of choosing readymade characters. From the comparison below with usual character creation, in the NES port only the readymade Paladin and Thief can be improved.

The Ultima series underwent lots of retroactive changes to continuity. First of all, one of the four heroes in Ultima 3 is supposed to be the Stranger from Ultima 1 and 2.

If you want to, you can name you characters after the Companions of the later games. The following table associates Ultima classes and characters according to their attributes. Anyway, some are not included for the folowing reasons: