Ultima III: Exodus/Dungeon of the Snake 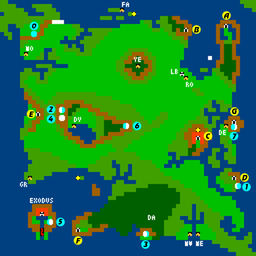 The "D" marks the location of Dungeon Snake

The Dungeon of the Snake is located on an island south-east of Britain (the Royal City) and north-east of Montor. It can be accessed by ship, but also using the Moongates. It is the only dungeon that conceals the Mark of Snake, therefore it is the only absolutely mandatory dungeon (even if you cheat to skip the Time Lord).

It's the easiest dungeon, because it has the lowest number of traps; all in all, a good choice to begin with dungeon exploration. Most of its chests (21 out of 53, i.e. 40%) are on the top floor, where enemies are weaker. You can repeatedly loot this floor to quickly raise gold, before you start a proper exploraion of the seven dungeons.

In the original ports, the dungeon is nameless. It was named "Cave of Sol" in the NES version. External sources named it "Dungeon of Snake", probably an abbreviation for "Dungeon of the Snake Mark".

Go to top
← Dungeons | Dungeon of the Snake | Mines of Morinia →