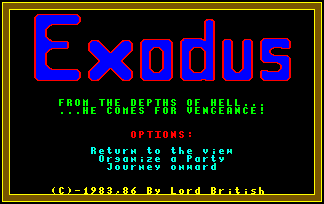 After the title screen is displayed, and a party of four adventurers are destroyed by a fire breathing dragon, a sample view of Sosaria appears. When you are ready to proceed, press the space bar. You are offered three choices:

Only the first letter of any option needs to be pressed to select that option. "Return to the view" goes back to the demo that can be seen on the title screen. "Journey Onward" begins the adventure! "Organize a Party" is where you should begin. 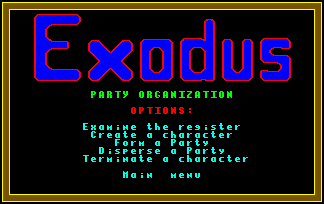 In the party organization menu, you are presented with the following options: 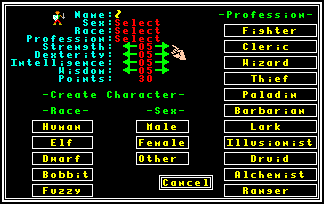 Up to four characters may be placed into the current party. This is done by first pressing 'F' to select Form a Party from the Party Organization Menu. Depending on how new your version of the game you, you will see one of two screens.

If you have an older version (original releases on 8-bit computers), you will only be asked to enter up to four numbers. These numbers must correspond with the numbers given for each character in the Register. You are not permitted to enter an invalid number, or the number of a character who is already in a party.

If you have a newer version (for 16-bit computers), this will display the character register. To the left of each character name and type is the party status of that character. A diamond next to the character indicates that the character is not in a party. Clicking on a character's name will select/deselect that character. When you are satisfied with your party selection, click on the Exit box to return to the Party Organization Menu.

Selecting Disperse a Party from the Party Organization Menu will clear all characters from the formed party and clear the map of Sosaria to its original state by removing all the monsters, ships, chests, etc. Disperse a Party will not, however, reset the movement counter that keeps track of the number of moves that have been made in your game.

If you wish to delete a character from your register, press 'T' to select Terminate a Character from the Party Organization Menu. What you see is again dependent upon the age of your versions. Older version will merely ask you for the number of the character you would like to terminate, which corresponds to that character's number in the register. In newer versions, this will display the current register of characters. Clicking on the character's name will bring up a dialog box asking you to confirm your decision to terminate that character. Click on the Okay box to confirm, then on the Exit box to return to the Party Organization Menu.