Characters can be divided into three groups based on this observation:

In general, a party should include:

Well, these are six, but you can only have four characters in your party. This means that you should choose characters that fill two positions.

In order to use all character classes, you have two options: (1) change the party formation when you reset the game and continue the same game, or (2) play three games to use all eleven classes extensively. This section describes significant trios of parties.

The traditional team puts together all the classes that were already featured in Ultima 1 and Ultima 2.

The healers team is good for beginners. If you create all its characters with Wisdom=20 (plus Int=20 for the Ranger), every character will be able to cast Sanctu/Heal since the game start. Surprisingly, the Illusionist results in a powerful melee fighter, thanks to her dexterity bonus.

The alternate team is more challenging than the previous two, as it has limited healing and no mass-destruction spells. The fact that three characters can use black magic does not compensate.

Here's a set of three equally balanced parties that allow to use all the 11 different characters in just three games. This outfit also allows to get four different sprites in each party in the versions before the NES one.

A party that does not include at least either a Cleric or a Wizard has very slim chances to pass a specific point in the game, and thus to complete the game at all, unless they buy some Sands of Time. Said this, the weakest possible party that can still beat the game would be the following.

Vice versa, many strong parties are possible. One of the strongest is:

Therefore, the following is a set of three very unbalanced teams. The Wizard is featured in two parties.

In the NES version, four characters are Female by default (sex is pre-determined with the class). Four other characters are Dwarves by default. The four remaining classes can all use black magic. These are three parties already.

Girl Power is a strong party: they have three healers and two physical attackers. Dwarf Nation has very limited magic, and is reminiscent of the "physical party" described in the section above. Dark Boys is a party that attacks mainly with fireballs instead of using weapons; unfortunately, MP run out quickly.

In the NES version, each character class has a different sprite. Each sprite has a main color: red, pink or blue. Adding a Cleric to the three red characters, you get four somewhat balanced parties. The main difference between the three is that the Pink party has more healing skills and the Blue party has less.

The best professions (based on race stats) shown in the artwork is the Fuzzy Thief (male), Fuzzy Druid (female), Human Ranger (male) and Dwarf Fighter (male). This gives a solid party with two characters who can heal. The Druid can cast damage spells or throw daggers if you want her in the back line.

Dividing the males and females in the artwork gives two strong parties. The males can veer from the profession party and use the Human Barbarian (steal and disarm), Elf Paladin, Bobbit Wizard while keeping the Human Ranger. The females are a bit more restricted (only containing 5 characters) but can include a straight Human Cleric and a Fuzzy Druid for healing while the Bobbit Alchemist (steal and disarm) and Elf Lark supplement sorcery spells.

The artwork gives 2 Bobbits, 2 Fuzzys, 3 Elfs, 3 Humans and 1 Dwarf. The Fuzzy/Bobbit party includes an Thief (steal and disarm), Druid, Wizard and Alchemist which will be low on healing but a fun combination. The 3 Elves should include the Dwarf Fighter to shun for a funny party with an Illusionist (steal and disarm), Paladin and Lark with plenty of healing and low sorcery (Dwarves don't like sorcery). The 3 Humans need a Bobbit Wizard to pick on for a strong party with a Ranger, Cleric and Barbarian (steal and disarm) for an almost classic party pick.

Unlike later RPGs, the Cleric and the Wizard have the same endurance as any other character. Together with their strong healing skills and offensive magic, they are rather powerful. A party of two Wizards and two Clerics works well in this video game! 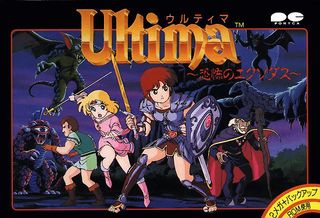 The original US cover depicted the enemy, Exodus, because the possible characters were too many to be all represented on the cover (11 classes times 5 races times 2 sexes = 110 possible characters), and a selection could have been a spoiler or misleading. Not so the Japanese NES cover, that selected four characters. Let's examine such party.

All in all, this team has limited healing (the Illusionist is the main healer!) and limited physical attack (the Fighter has limited dexterity).

The Illusionist should start with high enough Wisdom to cast a healing spell; her initial attributes should be Str=5, Dex=20, Int=5, Wis=20; although the Illusionist is a class oriented towards Dexterity, being a Bobit would allow her to use decent healing magic. After all, the main dodger of this party is the Thief (suggested: Elf with Str=15, Dex=25, Int=5, Wis=5).

The Fighter should better have improved dexterity, or he will miss enemies too often; an Elf or Dwarf with initial attributes Str=15, Dex=25, Int=5, Wis=5 would make him as strong and dexterous as possible.

The Wizard never leaves any doubt: a Fuzzy with initial attributes Str=5, Dex=15, Int=25, Wis=5. After your first visit to Ambrosia, he will be able to cast mass-destruction spells and a little bit of Healing spells.