This game is long, even with these gold and time saving clues.

You need about 20 000 G to raise all the attributes of one character to the maximum (5000 G less for a character without magic, 5000 G more for the ranger). It is the same amount of money needed in Ultima 2, but now you control a party of four heroes. This means 80 000 G to top up the whole party.

There are several ways to earn money faster, and usually a player can employ more than one mehod at the same time.

"#Gold from Death Gulch" is apparently the most popular method, but there are at least three easier ways to raise money, as you can see from this table.

In the computer ports, travel on foot across Sosaria. If you board a ship or ride horses, enemy encounter rate drops, therefore the gold you earn from battles will barely cover food expenses.

Vice versa, in the NES port, traveling on horses and ship is more convenient. First of all, enemy encounter rate is not lowered; second, horses give a speed advantage over enemies (you can select who to fight and who to avoid); third, fighting from a ship gives a terrain advantage. On top of all, in the NES port the party can board a ship while horse-mounted, thus getting all the advantages at the same time.

In the NES port, the healers in some towns pay cash to whoever gives blood.

Make a party of four healers (Cleric, Druid, Illusionist, Paladin, Ranger). Give blood to the healer in Castle British or in Moon. Heal up while traveling back and forth between these two locations; fight some enemies on the way. 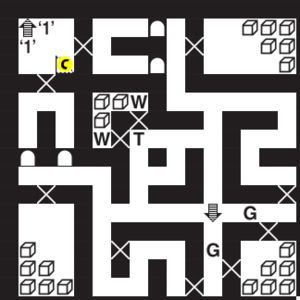 Map of the first floor of Dungeon Snake

This is by far the fastest and more convenient way to earn gold.

The first level of Dungeon Snake (NES cave of Sol) has 21 chests. A chest holds 50 GP on the average, therefore looting this floor will grant about 1000 GP every time (plus some equipment to be sold, but not in the NES port). For a comparison, the first level of any other dungeon has 0 to 6 chests only.

Dungeon Snake is located on an island north-east from the Montors, where a moon gate appears. Loot the first level and exit. In case of danger, a rank-E spell ("Sur Acron"/"Ascend" or "Rec Su"/"Rise") is sufficient to escape.

The cherry on top: there is an anti-poison fountain in the entrance room, to cure any hero who got poisoned by a trapped chest. 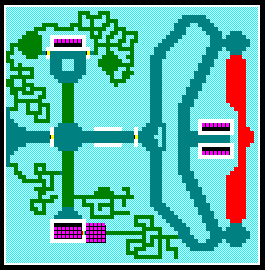 You can accumulate gold pretty quickly from the armory in the town of Death Gulch. Still, this can only be done by an advanced party: you will likely battle many powerful guards, and you will need a Mark found at the bottom of some dungeons.

You will need the [O]ther command to bribe guards to get out of your way. It can be learned in Moon (in Devil Guard in the NES port). Also, the Mark of Force allows to get double loot (Mark of Fire in the NES).

It's good to have a Thief with high dexterity who can grab the chests, and a Cleric who can heal him. The "Appar Unem"/"Open" spell allows to avoid traps in the chests, but if the spellcaster has low dexterity, he/she can easily alert the guards. An Illusionist with dexterity=99 and wisdom=75 (fuzzy race) has the best chance of success.

If you have no powerful fighters, you may want to bring along a lot of powders to freeze time while you run outside to safety. Note, though, that a powder costs as much as the loot of two chests. If you use too many powders, you earn nothing.

Death Gulch is found on large island to the east of Sosaria, and is a treasure trove of wealth.

There is a secret entrance to Death Gulch, just south of the main entrance; it allows to save a 100 GP bribe and a 50 GP key. Go north at the first place you can, then straight east as far as you can, and then north to inside the gate. Go east to the second locked gate; this one requires using a key. Go south to the entry on the left side of the screen. Go north at the first north fork, then south, then west. This should put you next to a guard (not in the NES port): bribe him. To the west lies the armourer's treasure room.

The armor shop has two rooms, separated by a force field (a fire field in the NES). The east room holds 25 chests, and the west room another 21. Since a chest holds 50 GP on the average, looting the east room grants about 1200 GP, and looting both grants about 2300 GP (plus some equipment to be sold, but not in the NES port). Still, you will need to use up a key (worth 50 GP) and bribe at least one guard (100 GP). There are 13 guards: you can easily avoid 5 of them, but bribing the remaining 8 will cost most of the gold in the east room.

In the NES port, bribing is useless, because the guards appear randomly when the party gets caught stealing. Instead, you can use a Heart Compass when the guards attack you, thus escaping combat and teleporting to Britain, the royal city.

These techniques were not supposed to be used. They are available probably because the game programmers did not think about them.

Try forming a party and transferring all food and weapons to one member. This is best done within the Castle, avoiding monsters with which you can't cope. Leave the town to save the game, quit out of the game and then relaunch it, delete the empty character shells, and create three more. The extra gold makes starting out a bit easier.

Avoid starting a game with four brand new characters whenever possible or learn to handle death. A starting team where all characters can cast "Sanctu"/"Heal" is a good alternative.

Since most of your travels will be on land, you will have to leave any boats you may have acquired from time to time.

Be advised that ships are very hard to come by. Because of their relative scarcity, you don't want them parked anywhere in the open, because they will be destroyed if the whirlpool comes along. The best way to leave them and be assured that you will be able to find them later is to park them on the other side of the silver snake and exit via the moon gate. If you wish, you can even fill up this entire waterway with boats and eventually be able to walk right into the castle Death from entrance at the moon gate.

In the NES port you can only have one ship at a time. It seems like the whirlpool does still get them, but they don't seem quite as scarce.