Hidden within the Depths of the Forest, and concealed with Powerful Magic, the City of Dawn can be reached be travelling west from Montor West. The exact coordinates of its location can only be learned after you obtained the mark of fire in one of the Dungeons.

In the NES port the final hint went missing (see the bottom line).

Start from the Castle of Lord British, walk west 7 leagues, then south 35 leagues into the forests to the south. When both Trammel and Felucca are new, then shall Dawn appear before you.

Alternatively, you can find this town by walking four steps north and nine steps west of Montor West. 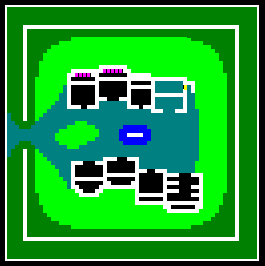 Within the towne are all services: a healer, an oracle, a grocery, the Thieves Guild, a stable, and the Ballyhoo Pub. The Weaponsmith and the Armourer are worthy of note, as in addition to the mundane stock sold by their counterparts elsewhere, they forge and sell items of Magic. Dawn's weapon shop has far better weapons for sale than in other towns, but they are more expensive, of course. In the NES port, there is a savegame inn, too.

More important, in the lower right corner are three guys, each with important clues about Exotic weapons.

You can buy some basic weapons from the many towns. More advanced weapons can only be found in the town of Dawn. Don't bother spending too much on armor, since the Exotic Armor is pretty easy to find and can be equipped by every profession.

Exotic Weapons are absolutely essential to fighting your way through the castle Death to reach Exodus. They are not the most effective weapons elsewhere because they have no long distance ability. Outfit each player that is capable of wielding distance weapons with the best possible. Even a sling is better than an Exotic sword if you defeat your foe before he gets within striking range.

After leaving Dawn, try to find a ship if you don't already have one. Once you've secured your own ship, try digging ([O]ther Command, type "DIG") on the two-tiles islands near the island town of Fawn and east of Grey.

You may prefer to keep some of your party members equipped with a Bow +2 (NES bow) or Bow +4 (NES silver bow), that are the best ranged weapons.

In the NES version, the word "Exotic" is replaced with "Mystic", the method is a little more difficult, and requires two different picks.