Ultima IV: Quest of the Avatar/Magic

In the NES remake, when the Stranger becomes an Avatar, his/her maximum MP promptly becomes 99. This holds true for every profession (in the subsequent episodes of Ultima, the Avatar will always be the character with the highest MP).

The Shepherd has no Magic Points, but in the NES remake she is the only character who can use the Sheep Flute, an item that casts the Sleep spell on all opponents.

Six reagents can be purchased in every apothecary shop, but the remaining two are the subject of side quests.

In the spell lists below, the following abbreviations and prices are used for the reagents: 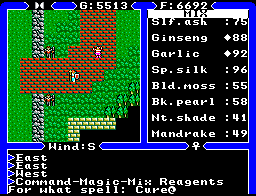 In the SMS port, once you choose the reagents to mix, you have to select the "MIX" command at the top in order to actually perpare the spell.

In the table below, spells are grouped by type, then sorted by the gold cost of reagents. Indeed, what determines the availability of a spell are not magic points, but the gold to buy reagents. The GP cost of reagents does not consider Fungus and Manroot, that can be obtained for free.

Prompt specifies whether a spell is available since the beginning of the game ("yes") or if the characters should find something during the game (the recipe and/or some rare reagents). Three spell prompts are labeled as "new mix": the manual describes a recipe, but the characters can find a better recipe to cast them in the game. In the SMS port, instead, two of those recipes (plus a third one) are completely omitted from the manual, and the player can learn it from the game only.

In the recipes, the keyboard button combinations are listed between brackets.

Knowing how many spells use a specific reagent can be useful to determine the quantity of reagents to be purchased.