All information to get the rare items is already in the game, if the Stranger talks with every character. Although the NES remake has shorter dialogues, most information is still found in the same towns and also at the same pubs. 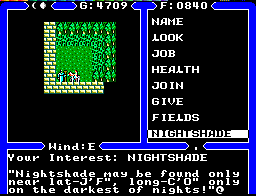 Virgil reveals the coordinates of the nightshade fungus.

The first clue about the nightshade fungus comes from Presto, a druid in the Skara Brae apothecary; he directs you to the pub in Vesper, then the companions are directed to Virgil, a mage in Trinsic.

All the thread can be followed by moongates: start in Skara Brae, take the moongate to Minoc and visit Vesper, then the Minoc moongate to Trinsic, and you are already rather close to the coordinates of the fungus. 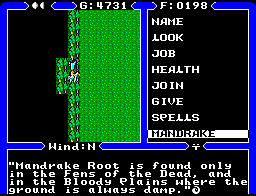 Calumny reveals the coordinates of the mandrake root.

The trail for the mandrake root picks up in the same city where the previous one ended: Trinsic. Swindrik directs the Companions to the pub in Paws, where a tip of 99 GP reveals that Calumny of Yew holds the final information.

Calumny tells you the two locations of the spots where mandrake root grows: in the plains south of Minoc and in the "Fens of the Dead" (the swampy delta south of Paws), but the latter location is easier to identify. As the Nightshade fungus, Mandrake root can only be found "on the darkest of nights".

Purchase a good stock of ginseng and garlic in Paws, and mix a good number of "Cure" spells. Even better: purchase reagents for just 8 Cure spells, overpay the apothecary, and restock after every trip to the Blood Plains, so to improve Honesty and Justice.

This spell is left as a riddle for the player. In order to solve the riddle, the player should read carefully the manual.

Therefore, in order to make an Undead spell, garlic and sulphurous ash sould be mixed.

Shazom of Moonglow speaks about the Resurrect spell, and says to ask his master Nigel, who lives in the Lycaeum. The recipe requires all reagents except for the poisonous nightshade fungus and the "bullet" black pearl.

Jingles of Paws speaks about the Gate spell, and says to ask his master Mentorian, who lives in Cove. The recipe requires just three reagents, including the rare mandrake root.

There are three spells whose recipe requires two portions of a reagent. Some characters scattered across Britannia will reveal that improved recipes exist.

In the SMS port, it is impossible to use two reagents in the same recipe, therefore the sub-quest was slightly changed. The manual omits completely three recipes, that can be learned only by talking with some characters.

The two threads start near each other, in Britain and in Castle Britannia. Both the injured man Sebastian in town and the imprisoned Reaper in the stronghold direct the Stranger to Buccaneer's Den for more information. Indeed, two characters in the outlaws outpost talk about Mondain's Skull: Ragnar (from the reaper) explains what happens if the Skull is used, while the barkeeper (from Sebastian) redirects the Companions to the poor Jude. This last character can be met in Minoc in the Poor House, and he reveals the exact coordinates of the skull. Furthermore, Servile in a secret room in Vesper gives more details about the effects of the Skull.

The shortest sea route to reach the location starts near the full moon moongate (Minoc & Shrine of Spirituality). Sail north to the island of Serpent's Hold, then continue east until you reach three volcanoes with a gulf between them: that is the spot. Use the sextant to [L]ocate the exact coordinates.

This side quest is absolutely optional, because the player is supposed to resist the temptation of using Mondain's Skull.

Believe it or not, the Quest of the Avatar can be completed without these special equipment parts (unlike in Ultima 3). Sure indeed, a great armor is useful. On the other hand, the Mystic Sword is just a melee weapon; anyway, it can be equipped to any Companion at level 8, because he/she needs no more experience.

Seesha in Castle Britannia and Scatu in the Lycaeum start the thread by directing the party to Zircon in Minoc. There, the smith relays them to Sir Simon and Lady Tessa, who live in Paws. It is necessary to be an Eight-Parts Avatar in order to learn the location of the Mystics.

Eventually, search the grass in the middle of the oak grove in Empath Abbey for the Mystic Armors, then search in the center of the training room in Serpent's Hold for the Mystic Swords (remember: the shortest sea route from the mainland starts from the Minoc moongate).

Both Mystics come in a set of eight. The Stranger and the Companions can equip the Mystics only if they are Eight Parts Avatars.

If, at this point of the game, you still need thousands of Gold Coins to purchase the best long-range weapons, you might decide to stop before exploring the dungeons. In fact, most of the gold collected in dungeons will have to be used for resting/healing and to restock on magic reagents.

Similar to Ultima 3, the top floor of one dungeon holds a significant amount of chests, that get replenished whenever the party leaves and comes back. Explore the Serpent Spine mountains north from Britain, and locate the entrance of Dungeon Despise on the north side. There are two rooms on the top floor, and they hold a total of nine chests (including the remains of Mimics). They will grant an average of 450 G per visit.