The black stone of humility[edit]

Seven stones were found in the seven dungeons (the White Stone, too, more or less), but the Virtues are eight: the Black Stone of Humility is still missing.

As per any stone, information about it can be found in the corresponding city. In this case, it is the ruins of Magincia. As per the White Stone, there is a thread to follow. Start by talking to Splot, a skeleton in Magincia ruins; he will relay the Stranger to Nate the Snake, in the same city; then, travel to Britain and leave a 99 GP tip at the bar: the Stranger will be directed to Merlin of Cove. Alternatively, the same information can be obtained by meditating for three cycles at the Shrine of Humility.

The Black Stone of Humility can be found by stepping into the Moonglow Moongate when both moons are dark, then search the ground.

This last stone is only used in the Great Stygian Abyss.

Requirements to enter the Abyss:

Requirements to enter the Chamber of the Codex (as told by the Ankh in Cove): 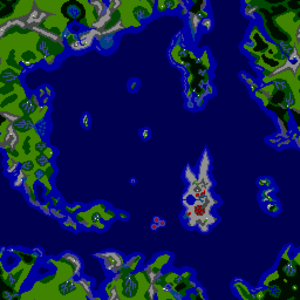 The shortest sea route to reach the Great Stygian Abyss starts from a peninsula east from Minoc (north from Vesper). Remember to use the magical ship wheel to strengthen the hull of your ship (as Allen from Cove instructed you). Sail straight north; when you reach the three volcanoes, turn east. On the west coast of the Dark Island, enter a gulf, where a pirate fleet waits in ambush. Defeat the ships and land at the innermost end of the fjord. The entrance to the Abyss is in the middle of a lava field.

At the entrance of the Great Stygian Abyss, ring the Bell of Courage, then open the Book of Truth, then light the Candle of Love. The aforementioned order is learned by meditating three cycles at the Shrines of Compassion Valor, and Honesty.

The final test of virtues[edit]

After you put the eight stone in the altar, a keyhole is revealed for the Key of Three Parts. As soon as it is unlocked, a voice asks for the Word of Passage (see The Strongholds of the Principles). Then, the final test of virtues starts:

After the last correct answer, you can finally read the Codex of Ultimate Wisdom, and enjoy the ending. Congratulations!