As in the previous and subsequent titles in the series, in Ultima 5 there is a penalty on virtue/karma for stealing, that is if you take items without being instructed to. The penalty for stealing is that the selling prices drop suddenly and abruptly, while the purchasing prices become more expensive. 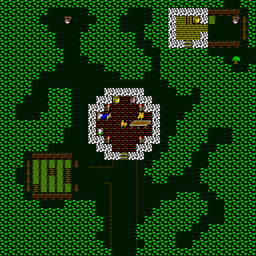 You start the game in Iolo's hut. Iolo and Shamino are your teammates. Press Z and check your team. Shamino is heavily wounded, and he is left with 5 Health Points only. The nearest place where you can heal him is Empath Abbey, to the north-west.

There is not much to do in Iolo's hut, so leave. 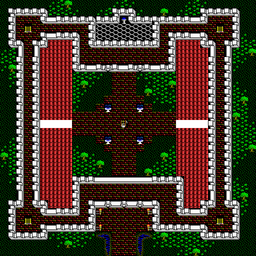 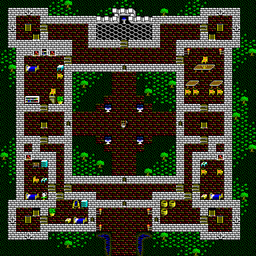 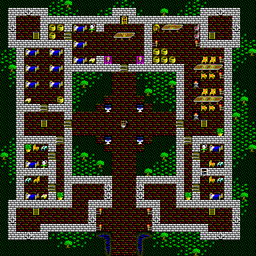 Travel to the north-west until you get to a river, then continue to the north. Soon you will get to Empath Abbey.

Eight people live in the Abbey, plus six guards and two injured men.

In the east wing of the castle you can find the dining room. Talk to the chef Cory. Ask her repeatedly for "squid" and/or "shark", and she will give you several free meals.

Climb the stairs and go north, to the room of Lord Michael. He will give vital information, and suggest you go to the eastern desert. Barbra, in the same room, gives you a hint about the endgame. On the roof, Tim the bard sets you on a quest that will lead to one of the four items of Lord British.

Talking to Hardluck the jester has little consequence.

Jessip the healer could heal Shamino for 65 Gold, but that's the most expensive fare in Britannia. You can sleep in the southernmost bed at the healer's, but this way you will not restore health points. Instead, exit from the Abbey and [H]ole up; choose either the Avatar or Iolo as a guard, and Shamino will heal up. If necessary, he can [U]se some of the three yellow potions you start the game with.

The next morning, you can recruit Julia and Toshi, then leave the castle. 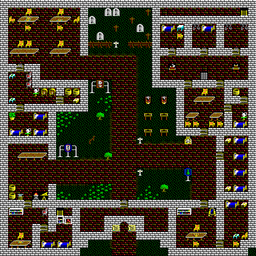 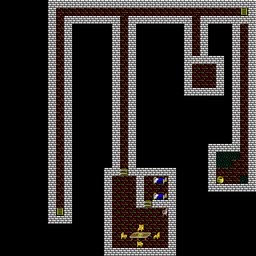 Leave the castle of Empath Abbey and follow the road to the east. After a clearing in the Deep Forest, the road continues to Yew.

If a Shadowlord is in town, leave and come back the next morning.

Yew is one of the most populous towns in Ultima V': it has 13 inhabitants (plus four guards and a nameless prisoner).

In every town, including Yew, there are guards at the gate and guards patrolling the town square. The gate guards are usually mute, but beware of the patrol guards: if you talk to them they will ask you to pay a heavy tax. If you refuse, you will end up in a cell in Yew. All your keys will be confiscated. Talk to Jerone, your cell mate, and he will tell you about his brother Jeremy, who comes at 10 AM and 10 PM. You can buy 5 keys for 50 GP from him. While you are waiting, check carefully the walls of the cell: there are three secret doors. When you buy the keys from Jeremy, why should you leave from the main door? Leave from the back door, and explore the underground passages of Yew!

In the underground passages you can recruit Jaana. Ignite a torch pressing "I". Explore the underground passages and meet Jaana and Landon. * Also note that in the upper-right dead end there is another secret passage; it leads to a room with rats and a barrel. You can then exit by climbing a ladder in the south-west and walking through a fireplace.

There are three prisoners in stocks or chains: Mario, Aleyn and a prisoner in the cell with Greymarch. Use a key to free them and earn Karma +2 from each. You will need 4 keys in total. Talk to Greymarch and learn about his son.

There are three services in Yew: an inn run by Duclas, a magic shop run by Madame Pendra, a weapon shop run by Ronan. Anyway, save your money this early in the game.

There are more people in town, but they are not imprtant yet. You can now leave Yew.

Equip your faster character with the heaviest armor parts and a close-range weapon; equip everyone else with slings (purchased in Britain).

Go to the bridge east of Britain and wait for the moongate while you grind trolls. Eventually, you will get better armor parts and a mid-range morning star.

Leave Yew and walk straight south. When you get between rivers to the west and mountains to the east, turn east and cross the mountains. Proceed to the southwest until you reach the town of Britain. 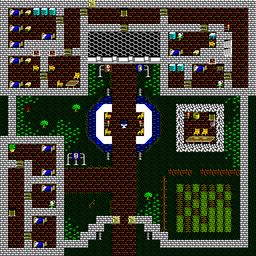 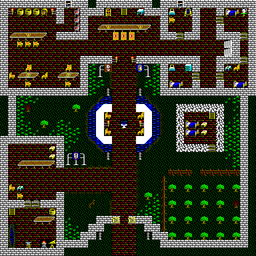 Talk to Terrance in the orchard. If you say you have little food, he will give you some. Furthermore, he will mention the Resistance and relay you back to Yew. Let's visit it later.

Greyson will explain you how to meditate at the Shrines of Virtue, and he will also teach you the Mantra of Compassion. Similarly, Annon explains who the Council Members are, and what the Words of Power are for. He knows the word for dungeon Despise, and gives you a hint about finding the word for dungeon Wrong (in Minoc, later).

The Wayfarer's Inn is located in the north part of town. There, buy a meal from Justin, and he will start the track about glass swords. The first hint relays you to Eb, in the same inn. The trail continues later, in Moonglow.

Gwenno can join you if you have less than six companions in your party. In fact, you have met all the Bard-Companions in the game already. You can leave some of them at the inn, but take their equipment first! Who shall we leave at the inn? Julia has highest overall power, but she also has the lowest dexterity: this is very bad for a class focused on dexterity. Gwenno, on the other hand, is the bard with best dexterity but lowest strength: she is unbalanced as well. The two remaining bards are Iolo and Toshi. Iolo is superior to Toshi in all attributes. Summarizing: keep Iolo and leave Julia, Toshi, and Gwenno at the inn.

If you want to buy food, Tika sells the cheapest rations on the Britannia mainland. At the armory, buy slings from Gwenneth for all your party members. 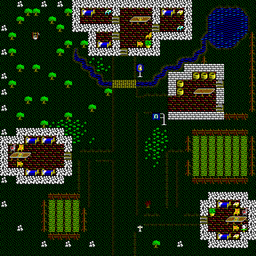 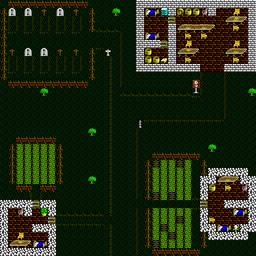 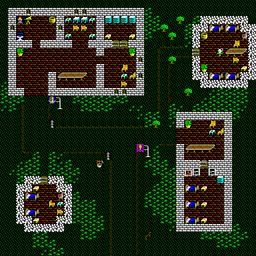 These are three villages surrounding the Castle.

Talk to Kurt in North Britanny and start the track about the magic carpet. No need to buy a horse, as you will learn later in Minoc. He is the only significant character, for the time being. 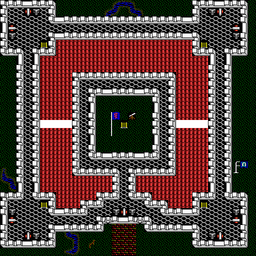 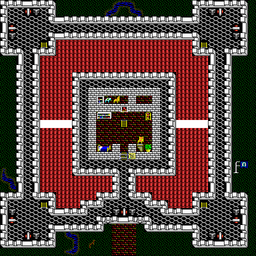 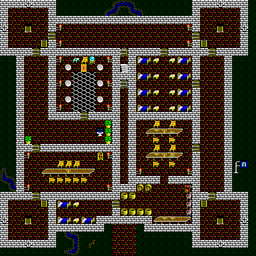 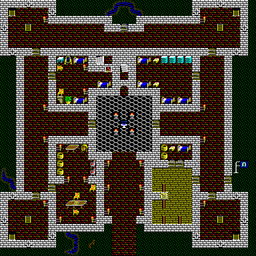 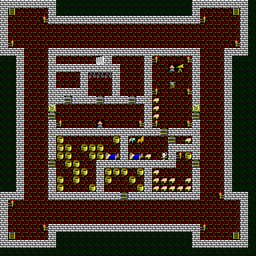 Surprisingly, most of the people in the Castle of Lord British have no useful information. Alistair, Stephen, Margaret and Chuckles give no relevant information at all ("cantabrigian" means "from/about Cambridge"). The prisoner Drudgeworth will even attack you if he is freed!

Desiree sets you on a track for an extra spell, called "create food".

Still, there is one track to be started elsewhere: Kurt from North Britanny told you to speak to Treanna about Valorian horses. The stable girl will refer you to Bandaii in Paws. 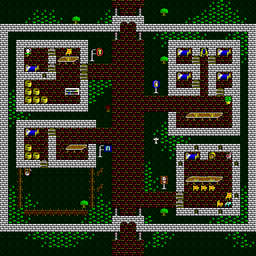 Few people live in Paws, and most of them are focused on their business.

Treanna from Castle Britannia told you about Bandaii, who is looking for a talking horse, but she forgot the horse's name. Now, Bandaii will tell you that name, and when you will meet Treanna again, you can tell her and continue along this tread. 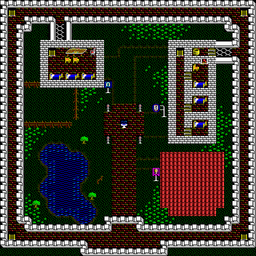 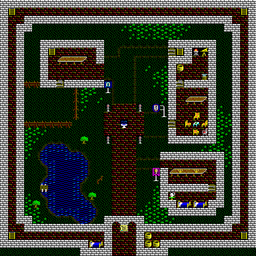 Talk to Woolfe the weaponsmith, and he will tell you about his son, who can be met at the lake after midday. The sickly Jimmy has passion for ships, and he will set you on the trail for the plans of His Majesty's Ship "Cape". They are in East Britanny, in the drawers in a locked room.

Talk twice to Gruman on the city walls, and he will tell you the Mantra of Honesty, to be used later at the Shrine. Woolfe also spoke about a man who sleepwalks: since there is no one else in town, he must be the local member of the Great Council. His name is Sindar, and he can be met on the walls at night, after Gruman went to sleep. 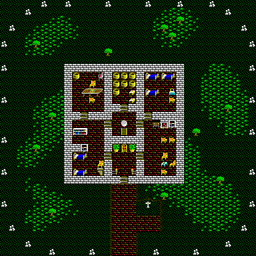 Talk to Sir Arbuthnot and learn more about your own recent arrival in Britannia. Charlotte and her son Anthony are an example of people who followed Blackthorn's laws.

Here you can meet Sir Kenneth: Tim from Empath Abbey told you about him traveling to Trinsic and the south. Sir Kenneth teaches you a harpsichord piece. Now you should find an instrument worth of a king... or the King's harpsichord.

On your way back from Trinsic towards Minoc, remember to stop in East Britanny. Pick the lock in the shipwright and search the wardrobes: you can get three Rel Hur scroll (Wind Change) and the plans for His Majesty's Ship Cape. Also, pay a visit to Treanna in Britain Castle: tell her the talking horse's name you learned from Bandaii in Paws, and she will tell you where you can meet him.

Now leave Britain and travel east. When you reach a swamp area, turn north and continue walking along the border of a forest to your right: north, east, south. When you reach the mountains, there is a pass to the east. Continue north along the coast, and you will eventually reach Minoc. 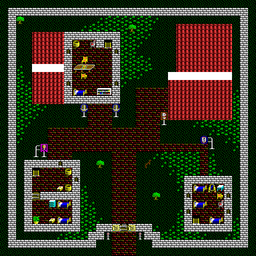 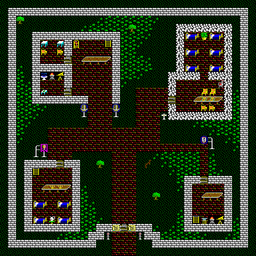 Annon from Britain told you that a sailmaker kid is the daughter of another council member. This is Rew, a really wonderful child: not only she will direct you to her mother, but also she teaches you the Mantra of Sacrifice and furthermore she reveals that some wishing wells give horses. It is actually true: look in some wells, drop a coin, wish for a horse, and you will get it. Some wishing wells are located in Empath Abbey and Paws.

Fenelon, the roommate of Rew, raises your karma if you talk about Rew and praise her. Fiona is the Rew's mother, and she knows the word of power for a dungeon.

Lady Sahra is a follower of Blackthorn's regime, but Tactus is more important: he starts the trail to infiltrate the Oppression. 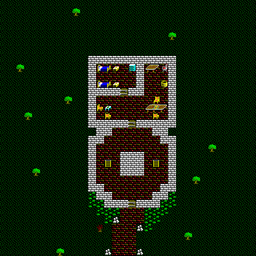 Emilly and her husband Windmire live here. They know a few things about the people and services in nearby Minoc, but nothing relevant. There is nothing special to do here.

The Shrine of Sacrifice is located in the desert, east of Minoc. Meditate using the mantra you learned from Rew in Minoc. 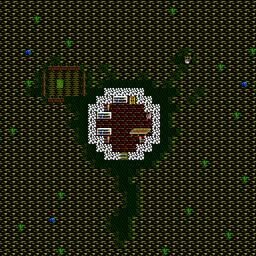 Sin'Vraal is a kind daemon who lives in the desert, south of the Shrine of Sacrifice. Lord Michael of Empath Abbey told you to ask him about the Shadowlord of Hatred.

By now all the mainland of Britannia has been visited. It is time to re-visit some locations and follow some threads. Go back to Yew, north-west of Britain. There are many people you should talk to now:

It is now time to get a skiff and start sailing the seas.