After you explored all of Britannia mainland, go back to Britain. In East Britanny shipwright you can buy a skiff, and sail along the coasts of Britannia.

Before you leave, remember to visit North Britanny and talk to all the Resistance members there, for they hold vital information.

Now let's sail to the east, and circumnavigate the continent. 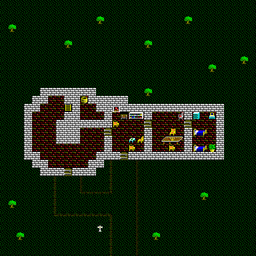 The lighthouse is just at the exit from Britain bay. The sign at the entrance read: "Fogsbane - Visitors welcome".

In Fogsbane live young Jennifer and old Jotham. This ancient mariner tells you about whirlpools, and how they lead to some areas in the underworld. 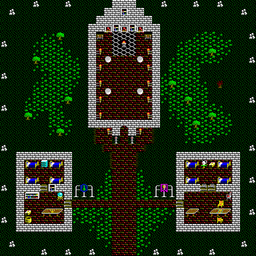 Follow the coast eastward and row up the second river you see: you can get to Lock Lake, and further on to the village of Cove.

In the temple, talk to Ava and offer a donation of 5 Gold Crowns: your karma will raise by 5. Still in the temple, enter the fireplace, search the wall and jimmy the secret door. Search the bookshelf for a second Ankh, but resist the temptation of stealing it!

The Shrine of Compassion is near the village of Cove, just a bit to the west. 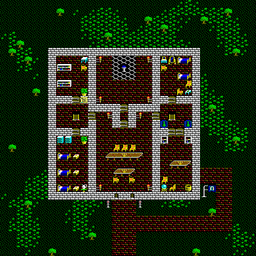 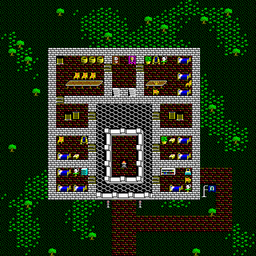 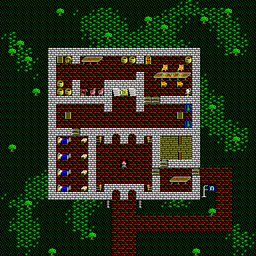 If you keep following the coast eastwards after you leave Lock Lake, you will reach a channel. Cross it, double the cape to the west and sail south. Soon you will reach the Lycaeum, the Fortress of Truth.

The lords of this castle, Lord Shalineth and Lady Janell will give you important information about the Shadowlords. In particular, Lady Janell relays you to the village of Cove, back to the west. She also tells you how to enter the Shrine of Spirituality.

Leof, a Resistance member from North Britanny, told you to speak to Sir Sean at the Lycaeum about Stonegate. The knight tells you about a necessary tool for climbing mountains, but we will find more about it later.

Mariah the mage lives here, and she will gladly join your party: she is a stronger magician than Jaana. Note, though, that she starts with 2 HP only, and you have to heal her.

On the second floor, avoid purchasing anything from Virden: his reagents are the most expensive in Britannia! 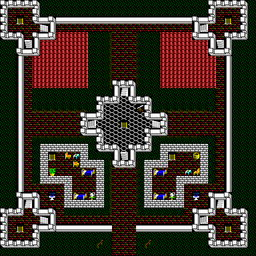 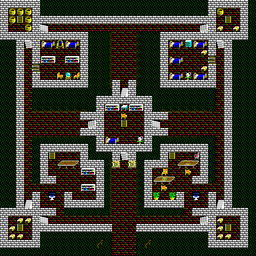 Exit from the Lycaeum and follow the road going south. It connects the castle of Truth with the town of Honesty, Moonglow.

You learned from Eb in Britain about Malik, who knows about glassware. Not only that, the young boy also starts a trail that will allow you to get the most expensive magic reagents for free. Also, from Desiree in Britain Castle you learned about Lord Stuart the Hungry; this ravenous man is in Moonglow, and he will teach the "create food" spell.

Malifora the gypsy is a member of the Great Council, and she will tell you both the Mantra of Honesty and the Word of Power that opens Dungeon Deceit.

At nighttime, visit the tower and talk to Zachariah. The wizard and astronomer will start a trail about a "power" of the Moongates. More about this later. 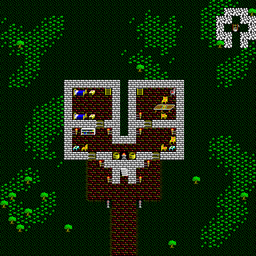 This lighthouse is located off the west coast of Verity Island, a little south from the Lycaeum.

Gregory and his wife Jacqueline live here. They are followers of Mondain, not just Blackthorn! There is nothing for you here: just pay a visit, then leave.

The Shrine of Honesty is located on one of the islands north from the Lycaeum and east from the desert. The Shrine itself is on the eastern coast.

Keep following the coast north and then west, pass beyond Minoc and navigate Lost Hope Bay. Eventually, you will reach the Shrine of Justice. As you can see, a poisonous swamp separates it from the mainland, therefore a boat is the only way to get there. 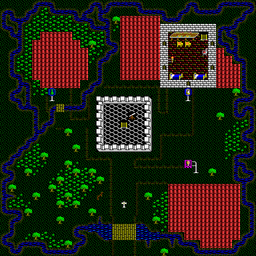 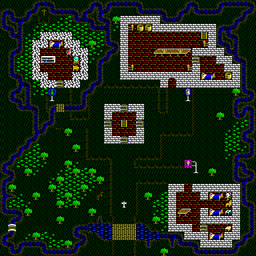 From the Shrine of Justice, keep following the coast west then south.

It was good to come here late: all the inhabitants continue some quests started elsewhere.

Malik from Moonglow said that Saul knows about the location of free reagents. He also came to visit a friend, Kindor, who is at the healer's. The sickly bard knows the mantra of Spirituality, and confirms that the Lady of the Lycaeum knows the location of the Shrine.

Way back, in Yew, Greymarch the prisoner was worried about his son. Youg Froed is here, and you can bring the son's message to the father.

Lady Janell of the Lycaeum told you about the location of the Shrine, and Kindor in Skara Brae taught you the mantra. All you need is a moongate, and of course there is one every night near the town. Just wait.

Keep following the coast south from Skara Brae and you will eventually reach the Shrine of Honor on the north side of a bay. It can be easily accessed from the sea only, because it is located between high mountains and poisonous swamps on the land side. 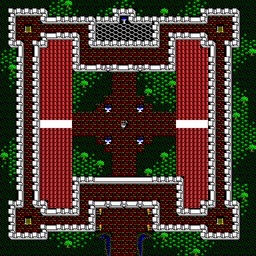 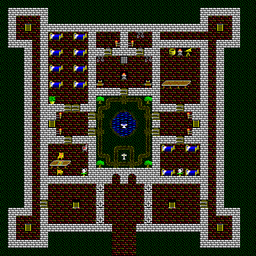 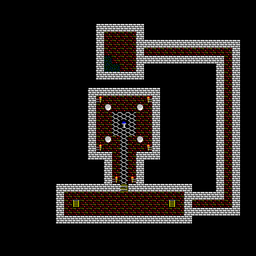 Follow the coast south until you get to Cape of Heroes, the southmost cape in Britannia mainland. Navigate between the islands to the east. Serpent's Hold is the castle on the easternmost isle, before the deep waters.

Strangely enough, a sign at the entrance reads "Live by the eight laws". On whose side are the occupants of the castle?

Monsieur Loubet gives you information about the flying carpet and how he gave it to Bandaii in Paws. If you already found the remaining parts of the quest, there is still a problem left: the magically locked door. Kristi has the solution, though: Shenstone the Minoc armourer makes skull keys that open magic locks. A beggar in Minoc gives you the final information.

In the same room with Loubet you can meet Maxwell, a fighter who will gladly join you. He is less strong and less dexterous than Shamino, though. Actually, he has the same attributes as Gorn, but lower health points.

Lord Malone and Gardner give you important information about the Shadowlords. Toede the prisoners, instead, prides himself with the traps he built in Blackthorn's castle, and he is willing to show off.

Moongates are the most unexpensive way to travel. On the other hand, it may take long before the right destination becomes available. The positive aspect is that during your waiting time, you can grind enemies for experience and gold. On the negative side, enemies at night are more dangerous: they are stronger and come in greater numbers.

A good grinding spot is the bridge east of Britain. Press and hold the spacebar until bridge trolls appear. If your characters get weakened, you can rest at an inn. In Britain you can buy some of the cheapest rations on the continent. If a Shadowlord shows up in town, you can always retreat to the castle and the three villages. 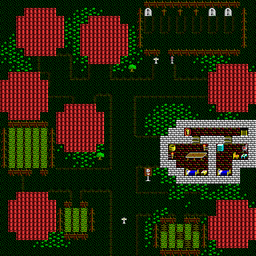 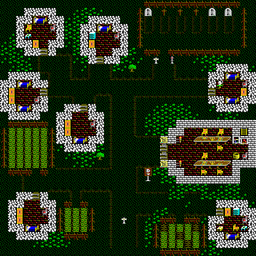 The moongates teleport you to New Magincia when the moon closest to the zenith (nearest to the middle of the "sky") is a waning crescent.

(Later, onboard a frigate, sail to the southmost end of Buccaneer's Den, then steer east: this is the direction to reach the island of Magincia.)

In the new town of humility there are just a few things to do. Talk to Shirita and then to Wartow: show your absolute humility, and the wise old man will tell you the mantra of humility.

Kaiko tells you about the last member of the Great Council: Hassad came to New Magincia from Skara Brae, but he was eventually captured and he is now captive in Blackthorn's castle.

The moongates teleport you to the Valorian Isles, where the town of Jhelom is located, when the moon closest to the zenith (nearest to the middle of the "sky") is a waxing half-moon. 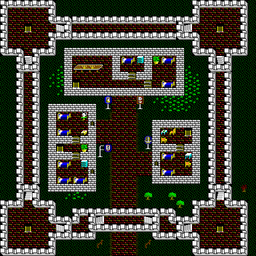 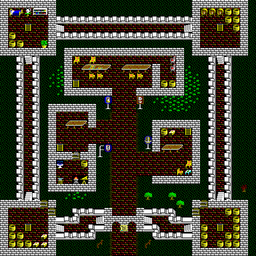 Talk to Trian and get a clue about the mantra of Valor. Then Thorne tells you the mantra itself and gives you a clue about the word of power. Talk again to Trian about the Word, and he will relay you to the local Councillor. The mage Goeth knows not only the Word of Power, but also the new power of the moongates, as you were told in Moonglow. Remember to spell your questions backwards when you talk to him.

This shrine is located on the island just south of Jhelom.

Later, onboard a frigate, you can reach the Valorian Isles sailing east from the Isle of the Avatar. Leave the Shrine of the Codex, sail for a while along the east coast of the island, then straight east.

When one of your character reaches a sufficient level of experience, pirate ships will start appearing in the seas. Defeat the pirates and conquer their ship. Now you can sail far from the coast and explore new islands.

A different map could be now useful, centered on the sea instead of the land. 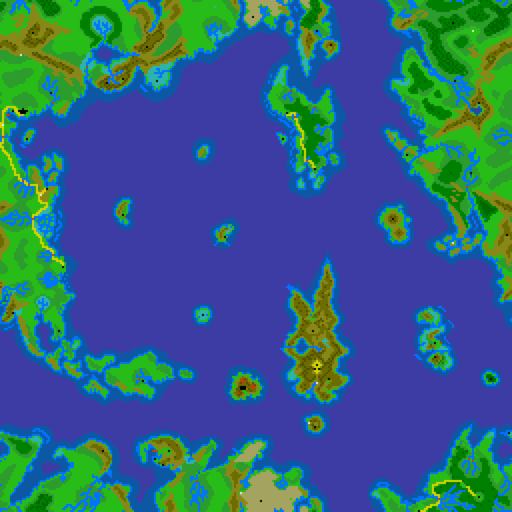 After you circumnavigated Britannia and visited the nearby islands, you can now get back to Britain. If you were lucky, you met some pirates already and kicked'em off their own ship. Otherwise, you have keep traveling along the coasts or purchase a frigate in East Britanny. The shipwright in Minoc is even more expensive. 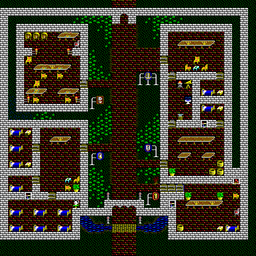 Sail from Britanny bay to the south. When you get to the latitude of Paws, steer east and sail the open seas. Soon you will get to Buccaneer's Den.

Sir Sean of the Lycaeum informed you that you will need a tool to reach locations atop of some mountains. Here in Buccaneer's Den you can find more about it: talk to Lord Dalgrin, Tierra, Bidney, in this order to find out more.

A trail about glass swords started in Britain and continued in Moonglow. Now you can learn more from Sven. Still, you will need the grapple to get the fabled swords.

Scally the bard sings and talks about the man who invented the sextant: this is the keeper of the lighthouse south of Trinsic.

There is an easy way to access the guild shop: search the wall to the right of the town gates. 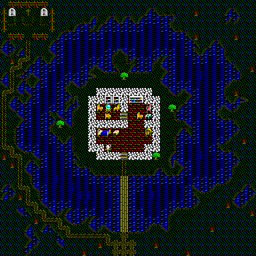 From the western ends of New Magincia you can sail north to a deserted island, or straight south to the swampy isle of Spektran.

Joshua from North Britanny gave you a reason to get here. You need the flying carpet as well, unless you have plenty of "antidote" spells.

Sutek the mage gives you important information to destroy the Shadowlords.

Once again, sail straight east: starting from Spektran isle, you will get to the Island of the Avatar.

Circumnavigate the Island of the Avatar towards the north: at the end of the northern bay you can find the Shrine of Humility.

At the opposite end of the same island is the Shrine of the Codex.

The sign near the Shrine reads: "Know that ye may only pass of on a sacred quest." 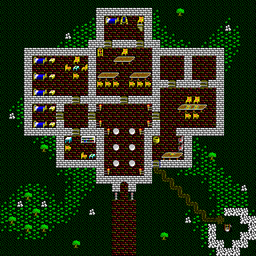 In order to reach this remote islet, sail east from the southmost cape of the Valorian isles. The keep of Farthing is hidden in the deep but small forest.

Dufus and Lord Seggallion will give you a spyglass. Zachariah from Moonglow explained you already how to use it.

The mage Temme teaches you a spell that vanishes lifeless objects. It is rather useless until Ultima VI: The False Prophet, where you can learn a spell to make objects reappear.

Quintin starts the important quest about the Mystic Arms, relaying you back to Britain. The next stops will be Cove first and Jhelom afterwards.