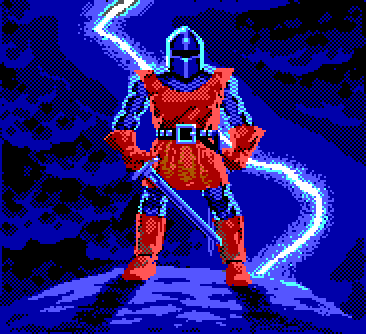 In Ultima 5 every character is characterized by three attributes that determine his/her abilities.

Dexterity is somehow the most useful attribute: it rules the accuracy of attacks (hit rate), the speed in battle (number of attacks), the ability to disarm traps, and probably the ability to dodge enemy attacks.

Strength comes second: if the enemy is hit (and that depends on Dexterity) Strength determines how much damage is dealt. There are a few weapons of which hit rate is based on Strength instead of Dexterity. Moreover, no matter your choices, the Avatar's Strength will be set to 20 if your answers would have set it to a lower value (see next section).

Intelligence is the least important attribute: it rules the number of Magic Points. Even if you are a magic-lover, in Ultima Magic Points don't rule over spellcasting, because this is actually determined by the gold you can spend on magic reagents. Since food and weapons come first, magic and intelligence should wait. However, on the other hand, the higher your intelligence is, the less you will have to pay for items in the shops.

At the beginning of the game, a Gipsy will ask you a series of questions about virtues to determine your attribute. Every question implies a choice between two out of eight different virtues, and each virtue chosen determines which upgrade the Avatar will get.

The test consists of seven questions. Although it is not said explicitly, it is divided in three rounds, like a tournament of virtues. In the first round you are asked four questions: you choose four virtues and the other four are discarded. In the second round you are asked two questions about the four virtues you chose right before: you choose two of them and the other two are discarded. The final round is a single question asking to choose between the last two virtues.

The correspondence between virtues and status upgrades is as follows: 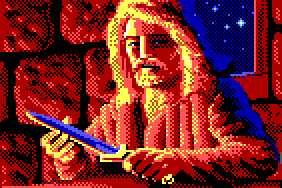 Shamino (to the right) with the Avatar and the Shadowlords

If you are playing either the DOS or the Atari ST port, you can import your character from Ultima 4. In the process, experience points and attributes will be reduced, so that the Stranger still has a reason to earn experience.

Locations of the companions:

The following graph compares the attributes of the characters, subdivided by class: 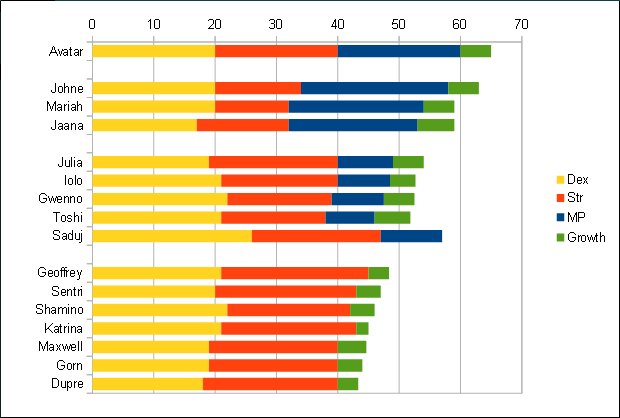 Despite mainstream opinion, using only four characters instead of six has several advantages: