Remember Sir Simon of Bordermarch? He gave you useful information about Lord British's Crown and Sceptre, but for the Amulet he relayed you to his wife, Lady Tessa. She simply tells you that it lies near the graves of valiant warriors: that means the knights that left with Lord British on the expedition. In the journey log all the details of the expedition are outlined and it can be followed to get the amulet starting from the waterfall in Spiritwood, East of Skara Brae.

In order to come back to the surface, though, you need to find your way through Dungeon Destard. Go to Jelhom and talk to Thorne and Trian: they will relay you to Goeth, who speaks backwards, but if you choose the right words he'll reveal the Word of Power to open Dungeon Destard.

Remember Saduj? He was looking for an item inside a sandalwood box somewhere in Lord British's private chambers. But where was that? The solution lies far away. Tim of Empath Abbey told you about a song with magic powers, if played on an instrument worthy of a king, that is the harpsicord (old piano) in the king's room. Tim also talked about Kenneth, who resides in the lighthouse south of Trinsic. Kenneth will ask you to study the piece for "Stones", and will ask you some of the notes: answer "DCB" and "987", and he'll tell you all the notes to play on the harpsicord in Lord British's room atop his castle.

Back to Empath Abbey, Barbra told you her vision, that although not clear includes a vital clue to free Lord British in the depth of the Underworld.

There is only one dungeon left: Shame. The word of power is known by Sindar of Trinsic: talk to Woolfe about his son Jimmy to get a clue about the member of the Council. Under dungeon Shame lies the entrance of dungeon Doom, and its word of power is revealed by the Codex once the eight shrines of virtue have been visited.

Always remember the procedure to find the exit from a room:

In the first room of Dungeon Shame, you should push the walls in the lower-left corner to reveal just a bit more of floor, and keep pushing the wall where the passage opens up until you get to the exit. On the first floor there are three ladders that lead "Deep", "Deeper" and "Deepest": the first two are good to earn experience, but they will not bring you to the Underworld. Get to the "deepest" ladder straight to Level 6, and then down to L8. There the secret doors will limit the usefulness of the gems, but only one room has a secret exit, and it lead upwards. The exit to the Underworld is in the lower-right corner of the floor. 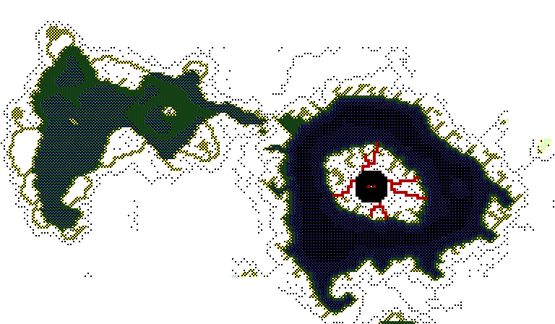 Map of the underworld between Shame and Doom

The quickest way to get past this area is to travel to the easternmost part using the magic carpet. The only way to get to the lake is to cast an In Por (blink) spell.

There is no way to avoid the deep waters, but check carefully the map to find the safest passage, that is in the north-western part. Once you get on the island, you'll have to travel along a lava river: the shortest one is in the south. Remember to equip Lord British's amulet. Search the darkness to find the entrance to Dungeon Doom. The word of power was revealed by the Codex of Ultimate Wisdom once the Avatar meditated at all the eight shrines. If you forgot, it is VerAmoCor (Ver = Veritas = Truth, Amo = Amor = Love, Cor = Courage).

Use Lord British's sceptre to leave the first room. It does not matter which direction you go, they all lead to the same area on the second floor. There, all the stairs leading down connect again to the same area on Level 3; the only exception is the central ladder, that is a dead end both upwards and downwards. The two rooms contain a stepladder each that brings straight to Level 5, and there the journey starts getting a bit more complicated.

As you arrive on Level 5, the various stepladders are connected to each other. In order to advance, you have to climb one of the two pits up to Level 4. From there, the exit is the central pit. Now you are on a "loop maze" on Level five: the exit is through the pit in any North-South corridor. You're back on Level 4 for the last time; two of the pits bring back to the loop maze, while the other two lead to one-tile rooms and down to Level 6.

Level 6 is luckily straightforward. Take any stepladder down to get to Level 7.

Now Levels 7 and 8 are another two-level maze similar to L4 and L5. The exit to progress is in the central room: remember all the steps to find a concealed exit as outlined above. In the following room, shoot a wall-tile in the upper-left corner to create a bridge. After a short corridor, take the stepladder back to Level 7; in that room, push the walls near the entrance, then push the walls in the passages that open up to reveal two exits; take any one you like, they bring to the same areas... and to level 7 again! Is there no end to this? Hold on to hope! Use a gem to view the pit traps: the uppermost and lowermost one bring back to the first part of Level 8, so go down through the central one. The North exit from this room is fake, walk there to open a small passage, then push all the wall tile at the end of it to reveal the real exit. In the corridor, the stepladder brings to another monster-filled room: just kill them all, but when you exit, remember to save.

Jump in the last pit and you'll find yourself in a richly furbished room: you are now 17 levels under the surface of Britannia, the deepest point in the whole Ultima Series! Approach the mirror where Lord British is trapped, and get absorbed. If you have the Sandalwood Box with you, enjoy the endgame; otherwise, I hope you saved where I told you.

Just know that if you want to report to Lord British, alias Richard Garriott de Cayeux, that you completed the video game, Origin System was disbanded years ago, but today you can find him on Facebook.

After Ultima 5, but before Ultima 6, the story continues with Ultima: Runes of Virtue.

Anyway, remember that once you finish Ultima 5 you can transfer the same character to Ultima VI: The False Prophet.