Cove is a small village to the east of Britain. It has just 8 inhabitants.

Go to Jaana's place (in the south-west) and get her to join. Take her equipment too. She is a very useful companion as she can give free heals/cures/resurrections about once a day. If she says she must rest, spend a night at an inn.

Now go to Rudyom's place (in the north-east) and ask about various things. Buy some spells if you wish, and be sure to pocket his wand: it is critical to the plot. Note that the wand makes Blackrock explode; you can use it as a lighter version of a powder keg. 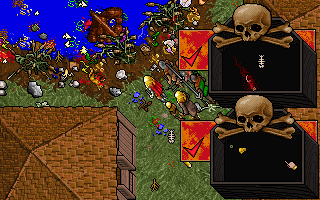 Just north of town, a dead cat ate a dead rat that swallowed some cheese and a regeneration ring. 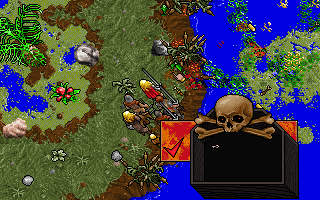 The green fish marked by the cursor swallowed the key that Mack lost in the lake.

The town mayor Heather is in the central building. Talk to him and he will sign the law. Also, he will unlock more dialogue options with most of the inhabitants of Cove. Later, go back to Miranda in Castle Britannia and complete this sub-quest.

Talk to De Maria, the bard in the tavern (west building). Then, cross back the river to the west and meet Nastassia at the Shrine of Compassion. She will start you on a quest that will continue in Yew and will eventually grant you 50 experience points.

Farmer Mack has the Hoe of Destruction in his shed (east end of Britain), but he lost the key while fishing. You can go looking for it along the dirty shores of Lock Lake; you'll find a fish on the north-west shore, partially hidden under some vegetation (at 2N 48E). With the signed bill and the key, go back to Britain and claim your rewards (if you are feeling lazy, just blow the door down using the powder keg from Chuckles' room back in the castle). The Hoe of Destruction lives up to its name, as it is one of the most powerful weapons in the game.

Rudyom also talks about the magic carpet. It is the best transport in the game, as it can hover over both mountains and sea. Only very tall buildings can bar its way. When you will need to cross the sea and buy a ship, go look for this carpet instead.

Take the western road out of Britain and follow it to the north. Eventually you'll come to a river. Cross it and keep to the east bank of it and head south-east (to 8N 30W) where you'll find the Carpet. Unlike the other transports in the game this one has no ownership documents.