There is no mayor in Paws, and no official Fellowhship branch. Instead, the Felowship mantains a shelter for the poor; it is the second building coming from the North. The unofficial branch leader is Feridwyn. Ask him about Elizabeth and Abraham, and he will say that they left to Jhelom.

The city of Jhelom is on the islands to the south-west. You can now choose one of three options:

In short: talk to Morfin the butcher, then Feridwyn, Camille, and Morfin again; the kids, Tobias and Garritt, also hold relevant information. The butcher will give you a key that opens Garritt's chest at the Shelter. One vial of serpent venom can indeed be found inside it. Before bringing it back to Morfin, confront all the people involved in this story. Upon completing this side quest, you will earn 150 experience points. 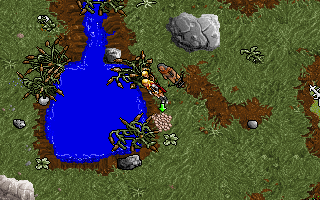 Look under the white pebbles...

Camille asks you to deliver a sack of wheat (10 kg) to Thurston. The latter will pay you 10 Gold Coins. Also, he is in love with Polly, the innkeeper. Talk to her about him, then to him. No reward for you from this love story, though.

Alina is the wife of Weston, who was unjustly imprisoned in Castle Britannia. She has different dialogue depending on whether you freed her husband or not.

Andrew gives you a hint to Morfin's key (whose home is to the north-east), that opens the backroom in the butchery. Another key is under a bucket in the same building: it opens a chest with a register, 5 vials of venom (sell to Kessler of Britain), and 5 gold bars (exchange them in Britain). The second key also unlocks the chest in Morfin's home, with 50 Gold Coins. The whole loot is worth 800 Gold Coins.

The village pf Paws is crossed by a river. Follow it to its source to the south (possibly along the west bank, in order to avoid the poisonous swamp). A pair of magic gauntlets is hidden under some white pebbles.

You probably purchased already a sextant from Beverlea.

Polly runs one of the cheapest inns in Britain. If you need to make Jaana rest (to recover her healing powers), this is the most convenient place.

Fenn, Komor and Merrick are three former farmers that got ruined by the drought. The latter "sold" himself to the Fellowship. The Avatar can give alms (up to 5 gold coins) to Fenn and Komor.