Ian, at the nearby Meditation Retreat, uses the same frame as the characters in Serpent's Hold.

Lord John-Paul sets you on a quest to find out who vandalized a statue of Lord British just outside the stronghold, and suggests you to rely on the help of Sir Denton, the tavernkeeper (central room). In short, you will be directed to these characters in this order:

Riky, the baby of Lady Tory, was kidnapped by harpies and brought to their nest near the #Shrine of Honor. See below for details.

The Cape of Heroes is the southmost peninsula (or promontory) of mainland Britannia. 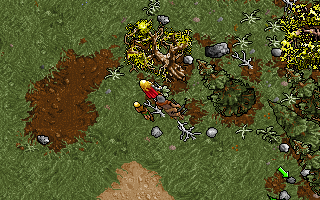 In this shot, the Avatar is looking at the chest (under the tree), and the green cursor (lower-right) points at the rock with the key.

The Shrine of Honor is located on the "west cape" of Heroes (the name applies to both capes). A party member should take baby Riky in his or her hands and bring him to Lady Tory of Serpent's Hold. It is impossible to put him in his cradle, but you can put him in his mother's bed, in the same room. You will earn 100 experience points.

Just north of the bay that separates the two capes is a chest hidden under a tree. Its key is under a brown rock a few steps to the south-east.

A cave whose entrance is north-west of the Shrine of Honor.

Hit any parrot with a mallet (technically: double-click a mallet and use it on a parrot), and they will reveal the location of a treasure. Some parrots can be found in the same room as a mallet:

The treasure cave is at 169 S, 28 E, that is on an island between Cape of Heroes and the Isle of Deeds (Serpent's Hold). The entrance is protected by 4 sets of invisible caltrops. The inside is divided in two by a "wall" of 6 gold bars.

This strange feature is located north of the Drylands, but the shortest sea rout is straight south-east from Serpent's Hold. An unlocked chest is on this big X.

The most notable item is a key that opens the chest in the central room of Serpent's Hold. Still, taking items out of the "X chest" (except for the key) or from the Serpent's Hold chest is considered stealing, and you should better avoid it.

Some locations can only be accessed by ship, because the land around them is too narrow for a magic carpet landing.

South beach of Isle of Deeds[edit]

A cave holds a key to the armoury in Serpent's Hold. The key to open that chest is found inside a fish in the stronghold kitchens.

Anyway, another key can be found in the stronghold, in sir Richter's room (south-west), but moving the clothes on the floor is considered theft.

You can take anything from the unlockable room without being accused of theft.