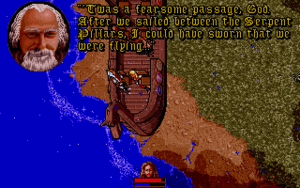 This is where the Game begins.

Your ship arrives via some strange teleportation and ends up beached. Say goodbye to it, because there are no ships or carriages in this game except when one is used to advance the plot.

Feel free to read the scroll from Lord British describing your items. Many of them are high-level items from Ultima VII: The Black Gate, including the powerful

Black Sword from the Forge of Virtue expansion.

Walk southwards and a magic storm will rage again. One by one your companions are magicked away; when it strikes you it instead replaces your personal effects with strange and mostly useless items. It will take you most of the game to get them all back again.

Walk southwards some more until Thoxa appears and talks to you. She wishes to determine (through a thinly-veiled copy-protection check) if you truly are the Hero from Another World or merely an imposter.

If you have saved before this point you might like to try failing her test and then talking to the people around you for some hilarious nonsense responses. Anyway, be sure to ask her about every topic listed for more information. After this another monk appears and fights her. Thoxa wins and both teleport away.

She leaves you with the

Hourglass of Fate, one of the most valuable items of all. It's like a portable Lord British; not only will it restore you to life if you die, but if a companion dies you can resurrect them on the spot. It's heavy (3kg!) but be sure to carry it with you at all times. You'll still be resurrected by the monks even if you leave it somewhere, but you can't raise companions without either using it or else dragging their corpses all the way back to Monk Isle.

Silver Seed note: the first time you are resurrected by the monks you will be given the

Amulet of Balance. You can use this on any Serpent Gate (giant snake pictures on the floor) to travel to DeathWatch Keep. The Silver Seed has some useful items, so if you have the expansion it's probably a good idea to get deliberately killed and set off to solve it fairly early. Go in and get the

Keyring if nothing else. It negates key-hunting and allows you to merely press K to (un)lock a door. 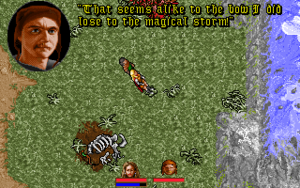 The Entrance is right from the Red Tree.

Only a little southwards from the fighting you'll find Shamino. Pick him up and continue southwards and you'll find a Magic Bow in place of a skeleton's head. Shamino theorises that the teleport storm swapped the two items.

Shamino makes a list of the items. The others will add to this when you find them again.

As a rule, returning a valuable item to its rightful owner has no purpose other than to "do the right thing"; most of the time you can keep what chance gave you and nick your original item from their house later on.

Also note that the items are literally swapped; if for example you give

Urn. You can use this method to get any useful items from Iolo (such as the money) straight away, rather than having to go through the whole ordeal to get to him.

On your way there you'll come to a red tree (152S, 27W). Walk northwards through the seemingly solid cave wall there and take everything you find. The

Lockpicks will come in handy very shortly, there is a lot more plot-driven breaking and entering in this game. Head eastwards after getting the loot and you'll come to a gate into the city of Monitor...

The bear skeleton has the

magic bow as its head (see above).