Exult have still more Keyboard Command, but those are for cheating through the Game. So here are the List: 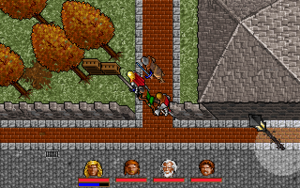 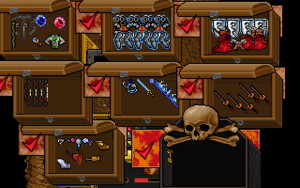 The Secret Entrance is very well hidden behind a Tree in Monitor and its at (151S, 5W). Create a "Ladder" there to reach the Teleporter hidden behind the Tree. It leads to Cat Isle. There are many Corpse lying around, but they don't have anything on them. South from the Cave Entrance is a Hut with a Serpent Tooth in a Chest inside. It leads to Temple of Emotion. East of it is a Cave. Enter and go down the Stairs will send you in the World of Dreams with your Companions.

The Main Cave behind the Cat Statue have some Treasure. Go into Cave and go South to reach the Torture-Room. The Skeleton on the Table has a Skeleton-Key which work just like the one in Black Gate. The Chest before the Statue has some Important Stuff like Comb of Beauty, Gwani Horn, etc. That is still not all. In the Back Room are 6 more Chests with Stuff like 6 Glass Swords, at last 3 Set of Magic Armors, most of the Serpent Stuff and many more. To Exit go North, then West to Outside. Step on the Teleporter to go back to Monitor. 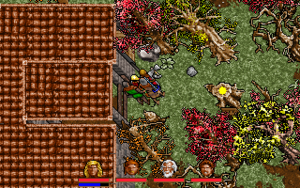 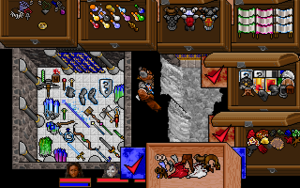 There is another hidden Teleporter out there and this time its at Stefano old House west of Moonshade on a Stump. Put a Crate near the Stump to walk upon it to reach a small Isle in the Sea. On the Isle is a Magic Axe and a locked Chest with 200 Guilders, but that is not all there its. Walk North on the Water to reach the Mad Mage Isle through the Fake Wall. In the Cave the first things you see is a Painting and 5 Powder Keg. There are many nude Women walking aroung. Right by the sides of Cheerleader Statuen are 6 Chests with different Stuff (like 100 of each Reagents, 9 Scrolls of Create Food and more.)

That still isn't all. No, there is a Room with some of the best Stuff like 100 of each different Arrows, Magic Armor Set and also another Philanderer's Friend. The key for this room is near the bridge by Gorlab Swamp. Going West and South only leads to more nude Women and Lamias for you to see. If you have looting the Place (or the Women), then go back on the Small Isle and step on the Teleporter to go back in Stefano old House. 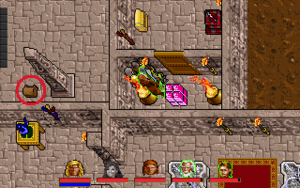 This is where the Backpack is.

There is a Backpack hidden on Sunrise Isle behind the Walls of which you can only see when you are in the Rooms near the Cube of Fire. Inside are all Serpent Stuff and also all 3 Blackrock Serpents. But to actually reach it you need to hackmove it.

It is possible to obtain two blink rings from Selina as soon as you get her. Open her paperdoll and take the ring into a companions backpack or paperdoll, then as soon as you close all open windows, open hers up again and repeat taking the ring off. After doing this once or twice she will be wearing two blink rings. Take both off of her and place them to your backpack then onto a characters hands (this may not be necessary), and place an invisibility ring onto Selina. After this she should stop caring about her rings and you can keep both to use as you please.