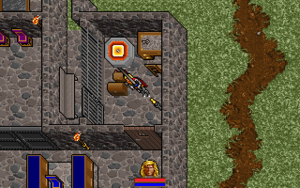 Back in Moonshade again

You are back in MageLord's House and Stefano will leave you and give back his stuff to you. Now you have to search for your friends to join you once again. 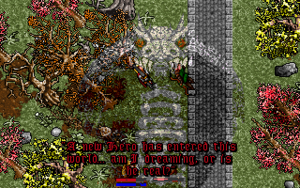 You hear the Voice of Great Earth Serpent the first Time, but not the last Time.

Chill Scroll. When you got the Earring you will hear the voice of the Great Earth Serpent. Iolo will also tell you that he befriended Gustacio and you should talk with him. Go back to prison to take up your dtuff and sort it out with your Party. There is one key on the desk and two more in it.

Talk with Ducio about the daemon sword and he will send you to Gustacio. Talk with him to learn that Mortegro was hit by lighting and disappeared. Don't worry you will find him later in game. Ask him about the Demon Sword and he tell you that the Flux Analyzer, that can fix it, was stolen years ago. Now talk about Spells. If you help him with the Experiment, then he will teach you Spells for free. That is a good deal, so say yes. He will explain the Experiment in more detail and give you an 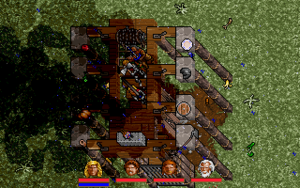 Energy Globe on the Altar. Now pull up the Winch and pull all 8 Levers to observe the results of the Teleport Storms. Use the winch again to stop the storm and you get teleported at the Pit South of it. Go to the Altar again to collect your Friends and go back to Gustacio to give him your Reports. He will send you to Fedabiblio. Do so and talk with him about the Experiment. He gives the advice to look in the Crystal Ball and come back to him. Look in the Crystal Ball and you will see how Edrin was transformed into Ale the Parrot. Talk with Fedabiblio about that and he will send you back to Gustacio. Tell him that Ale is in fact Edrin himself. He will give you a new

Energy Globe and a

bird cage to put Ale into.

Go back to the Altar once again. Put the new

Energy Globe on the Altar and put the

Cage with Ale on one of any 8 Pillars. Use the Winch then pull the Lever to change Ale back in Edrin. Talk with him about different things. One special note is his Dreams with Siranush. This Woman will be important later on.

Go back to Gustacio and talk about Experiment. He is glad that you completed it and will give you the

Mirror of Truth. Then ask him about Spells. He will theach you all Spells for free. Pick Detect Trap, Conjure, Delayed Blast and Spiral Missiles. All other Spells are already learned by Scrolls or buyed. Now you have the Chill Spell transcribed into your

Spellbook, you can buy the Key to the Catacombs from Julia for 40 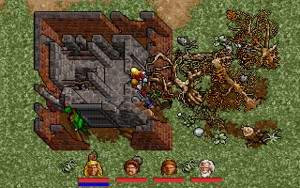 This is the Entrance to Furnace

The Entrance to the Catacombs is at (96S, 132E) and Ernesto, a Ranger is wandering around there. Unlock the Door with the Key from Julia and go down. It doesn't matter which path you take, since both leads to the same place. When you get to the bellows on the other side, then search for a path leading east. You will come in a small "Village" where

Ratmen live. You may put them to sleep with the Magic Harp or you can kill them all for Exp. The first Crate you see in there are 78

Gold Coins. Leave the Ratmen Village to the East. When you come across to a Crossing go West first.

Keys
The Key of Fire and Key of Ice cannot be put on Keyring, because they are needed to merge into the Blackrock Key.

Remove the trash blocking the Path to the West. Kill the

Gold Coins and 2 Potions. Behind the Door to the West live a

Fire Elemental. Go back to the Crossing and go East until you come across a House where some

Wildmen are. Go West to the Stairs. Go South to the Bridge and talk with Zhelkas. Say yes to taking the Test of Purity. Don't forget to cast Chill, otherwise you will suffer through the Heat. The Lever on Ground is stuck so push the Button on the Wall. Go through the open Door over the Bridge to the East ignoring the Stairs. You will then come to the Underground City.

If you go North passing a Room with some Ice Wine and then go West you will find 2 Doubledoor magically locked. Unlock them both and push the Button to open another Door to the Startpoint. Go back to the City and go East to a Pool. Southwest from the Pool is a Corpse with another

Worm Hearts. On Ground near the Pool are 13

Gold Coins. One of the Corpse on North-side of the Pool has the Key of Fire. 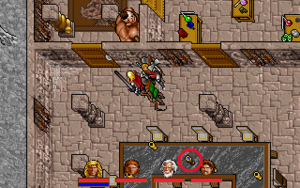 The filled Goblet is on the Table.
Phospor
You need to place 1 Serpentinium, 1 Agnium and 1 Zerine on the Pedal. Push the Button to create 1 Phospor. With it you can light up the Lamp in Furnace.

Go North in the Library. There is only 3 available Books to read. All the other Books are unreadable. One Book tell how to use some Reagents to make Phospor and one tell what the use is for the Key of Fire and Ice and the last book tell about the Civil War. The Corpse in West Room has the Key to the Room under the Library. Unlock the Doors below and get

Worm Hearts. North of the Library is the Conjury. On the Table is the

Everlasting Goblet. With that you never need to worry about Food ever again. In the Lab are alots Reagents to grab, but beware of taking it, since some Tables are trapped. The Bedroom upstairs have more Reagents and Potions to take.

East of the Pool is the Arena. Pull the Winch and enter it. The Gate will close and 4 Doors with 1

Automaton each will open. Kill all 4

Automatons and the Door to the Northeast will open. Get the Key which open the Doubledoor just East from there. Enter it and ignore the magically Door and search the Corpse in Southeast Corner of the Mushroom Garden. It has the Key of Ice and a Serpent Tooth (it leads to Monitor). Another Corpse in the Middle of Room has one more

Worm Hearts. South of it another Corpse has

Unlock Magic Scroll. Use it on the Door you ignored before and go North. You come across a Temple with the Fire and Ice Pillar.

Fail Test
In case if you fail the Test of Purify, then you need to get the Everlasting Goblet for Zhelkas to receive the 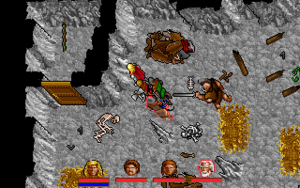 The Troll with the Sword has a Key to Serpent Staff.

Click on the Fire Pillar and you will take to the Test of Purity.

After you're done with the Test. You will receive the

Serpent Ring from Zhelkas. Talk with him again to ask to leave Furnace. Go in the right Building and place the Key of Fire and Ice on Altar to get the Blackrock Key. This Key can now be put on Keyring and it open the Door on second Etage. The Teleporter behind it leads to a Serpent Gate and a Corpse with 3

Magic Scrolls, but you already took it before.

The Left Buiding have 6

Chill Scrolls to take. Go back to the Startpoint where you meet Zhelkas the first time. Ask him again to leave Furnace and he will pull the Lever to open the Door. Go South in the Trolls infected Lair. Go West from there to find the destroyed

Serpent Staff. One of the

Troll here has the Key to Serpent Staff. Go South in the dirty Path the west to a Deadend where a

Magic Axe is hidden under the Trash. Go back and go South and West. Go over the Bridge until you reach the Exit. You are now back on Mainland.

Magic Bow and some

Arrows. The Cave also have some

Gazers. The Chest is locked and have

Gold Coins. Go up and take the Purple Key behind the Tree (It's hard to see it).

Spellbook is near the northren Fur Pallet, but if you try to take it, it'll get destroyed for good. At last the

Stoneheart is still in your Possession.

Go to top
← Mountains of Freedom | Furnace | World of Dreams →