If you haven't dealt with Simon yet, head to Monitor and do so, otherwise you won't have the keys you need. 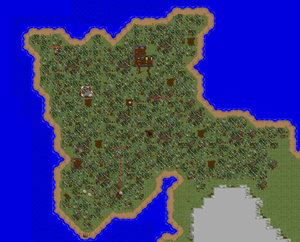 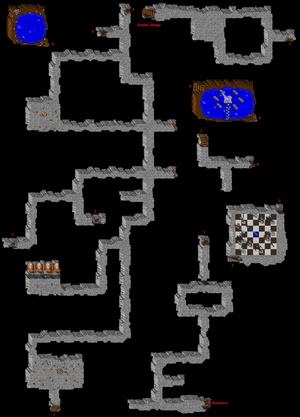 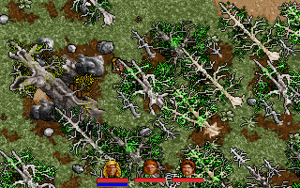 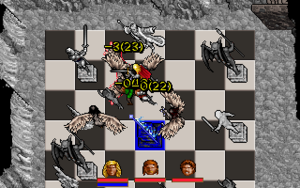 Head to (69S, 32W) and look for an almost invisible stairwell. Once down there head west, then north, and open the door using Simon's keys. Continue north, down the stairs, and keep on going north until the first Fork. West is a Beer Room which are magically locked, but there is nothing of interst there except some Goblins and Scorpions, so continue North to the next Fork. Go West and go down either of two Stairs. You see a Chessboard with a Monk and some Stone Harpies which comes to Life if you step on certain Plate. In the middle of Chessboard there is a

Come back up and continue North to the next Fork. In one Barrel there are some

Cure Poison-Potions. Continue north until you come to a fork with two staircases. The North Staircase lead to a Deadend with Headlesses, but there are some

Gems to grab. Take the left one, being careful to avoid the tentacles in the water. Walk around the pool and go up the stairs, then head west, north, and up some more stairs. Continue north until a path opens west, and then up yet another set of stairs. Now head west, north, east to a Room with a Statue and

Fire Wand, so grab it and go back west, and all the way north.

The Chest in a Circle of Stone is a Trap so ignore it and continue North. Notice the locked door to the right on your way there. The Helm of Courage is on the other side, but you need the key first.

NOTE: if you want to skip a whole lot of trouble, head north and grab the chest in the centre of the large area there. Bring it back, place it near the door (save, just in case it doesn't work) and attempt to open it. Not only will it explode it will also blow the door down. If you choose to do this there is no need to do ANY of the following. Just read and pocket the two scrolls and head back to Monitor with the Helm. 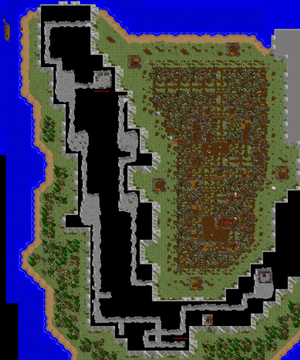 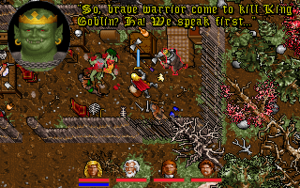 Now head on into the village. Goblins will keep appearing and attacking you, but if you sleep until somewhere past midnight you can murder them in their sleep. Pomdirgun lives in the large building at (30S, 20W). Attack him and he'll talk to you. Regardless of what you say you need to kill him and take the key. He also has a

Gems and Money. On the Ground besides the Bed is a

If you want a

Sword of Defense, head to the slaughterhouse (or kitchen?) at (19S, 23W) and search the female Pikeman (which is probably Astrid). You might like to cremate her as a way of saying thanks. There is also a

Magic Sling in the Hut near the Entrance you came from.

When you've got all you want head to (19S, 17W) and free the Pikeman there. He will follow you to town and then will disengage, but if he catches you pocketing any Goblin possessions on the way there he'll attack like any town guard would. Just kill him if he does this, he plays no part in the plot. Cremate him too, if you wish. 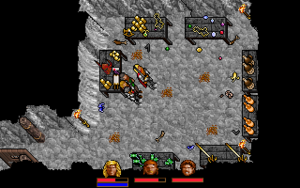 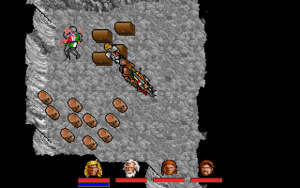 Now head back to that locked door. Take the

Helm of Courage and whatever loot you fancy. Read and then pocket the scrolls (be sure to take both Scrolls), then head back to Monitor. Talk to either Brendann or Caladin about the matter and show them the proof. Lord Marsten and Spektor will be arrested and thrown into prison. If you don't bring the evidence with you Brendann/Caladin of course won't believe your story.

If you talk to Marsten/Spektor after this point they'll allude to their treasure trove and a new destructive weapon secreted away there, but of course won't give you directions. Talk to Lucilla at the pub about Spektor; she hands over a key to their secret room! Head to (154S, 12W) and then walk straight through the seemingly solid cliff face. Through this door you'll find what's left of Cantra's father, as well as lots of goodies. Be careful not to double-click the

powder kegs as this will cause them to explode. You can take some with you if you wish as there are quite a few doors around the land that you can open ahead of time with brute force without screwing up the plot flow. 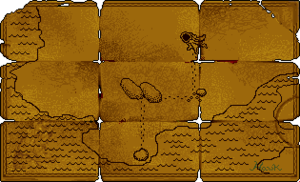 You can take Hawk's treasure now if you wish. Look inside the hollow tree at (85S, 23W) to find a mass of

Monetari, and most notably the

Serpent Crown. Hold onto this, you'll need it later. Or get it later in course of Game when you got the Key from Fedabiblio or found it on Hawk in Moonshade, which unlock the Chest in Hawk's Room which has a Treasure Map to the Treasure.

The Jester live in a Hut at (87S, 29W) and there is some Money in the Chest and Jester carry a

At (72S, 20W) you will find a House where a Family got slaughtered. There is nothing special, but the Chicken and Cow will give lots of Food.

In the crate in Chief Pomdirgun's Hut are the missing

Burst Arrows. You may drop the

odd Hairbrush. You don't need it anymore. In there is also another Key for which use is unknown.