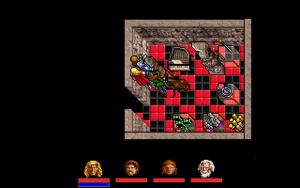 Secret Treasure Chamber in the Mine.

Go North to the Village at (0S, 66E) to meet Draygan. He will warn you from Morghrim and tell lies to how he came to Power. Talk to Beryl to hear what truly happened and how Draygan is invincible, but tell you to treat a

King's Savior to put Draygan to sleep. She also tell you where Morghrim live. In the Mine are some

Gold Bar to grab. There is also a secret Passage leading right to a Chamber with 99

Lighting Wand. The Secret Passage is below the Chest with 2 Rings inside.

Sleep Arrow
You can also use any

Sleep Arrow you found on Serpent Isle or in Silver Seed.

In other House are 20

Magic Gauntlets. You need the Arrows there to be treated with King's Savior, if you don't have any. Alternative you can also create Arrows with the Sixth Circle Spell "Create Ammo". Go to Morghrim's House at (54S, 23W) and talk with him. He will tell you more on Hound of Doskar, Orb of Elerion, King's Savior and Ultima VIII: Pagan. In his House is some

Arrows to change it in

Go back in Village and shoot Draygan with the

Sleep Arrow and get

Magic Leggings and Orb of Elerion from the Corpse. Forest Master Morghrim will appear and want the Orb of Elerion back so give it to him. In return you will receive the 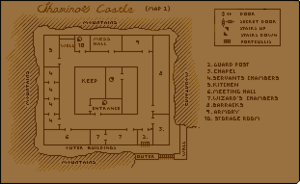 Where is what.
Entrance
Or you can cast Telekinesis twice on winches to gain Entrance into the Castle.

Wooden Sword on the Ground and use the

Hound of Doskar. Let it track the

Wooden Sword and it will point to the East where the Castle is. The Castle is at (3N, 99E) and if you come near it, Shamino will remember it and will draw a Map of the Castle if you wish so and he will tell you of a secret Passage to the Castle. The Secret Entrance is at (2N, 78E) so enter it through the Fake Wall between the Stump. There is only one Path to take to the Stairs below. 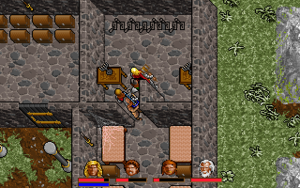 Pull all Lever to the Bottom to open all Doors.

Go North all the way to a

Cyclops. Kill him and get the

Bolts from the Chest. Go South, West and North to the Stairs. You will then be greeted by Ghost Beatrix. Click on the Wall to the South to open the Way into Castle. Go West and enter the Kitchen, but the Oven are trapped. The Corpse have a Diary that tell you what he was doing with Batlin and how they hunted down Banes. The Meeting Hall has another Trap. If you go near the Podium the

Suit of Armors will come to Life and attack you. In Barracks a bunch of

Undeads will attack you. Go North and click on the Wall to gain access to the Switch Room. Pull down all Lever to unlock all Doors in Castle. The Chests in Barracks are mostly locked and only contain normal Armor. In Chapel Beatrix will appear again and attack Shamino for abandoning her and disappear again.

Keep
If you didn't call the

Hound of Doskar to track down Cantra, then the Entrance to the Keep will be blocked by Energy Field. That is also why you need to sniff out Cantra, even though you know where she is.

In Wizard's Champer Beatrix appear once more to attack Shamino and vanish again. Get the Red Key from the invisible Chest in Bedroom. It open the Door to the Chest and 3 Scrolls which are:

Mass Cure Scroll. The other Chests have lots of Reagents to take. In Servant's Chambers is nothing of Interest except of

Spiders. In Armory are 8 Chests of which 4 front Chests are empty and the back Chests cannot be picked so you have to destroy them. There are some Armors,

Dragonslayer Sword and a Note from Beatrix. The Armory is also where we meet Beatrix a third Time.

Now enter the Keep and go left. Kill one of Batlin Companion and go right to attack 2 of Batlin's Companion and Palos. While 2 of them died fast, Palos cannot be killed and Batlin will come in and say that Cantra is dead and the last Bane is his. He and Palos will then disappears. Check the Desk in the next Room for

Telekinesis Scroll. If you hadn't bought Invisibility, then transcribe this one in the Book. Go up the Stairs and the Great Earth Serpent will speak to you and telling you to go the Temple of Emotion and searching for the Eye of the Moon.

Beatrix
If Shamino dies after you've spoken to her, then Beatrix will heal him and give him a Book and then depart to the Netherworld. 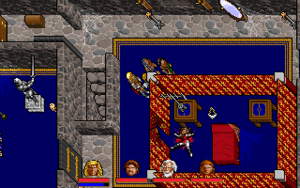 The Room to the Left have 44

Gold Coins and the Chest only have some Armors. Go near Cantra Corpse and a Monk from Monk Isle will show up and take the Corpse to Monk Isle. Use the

Hound Whistle again and let it track Batlin's Medaillon. He will then point to the North. At (28S, 3E) is the Entrance to the Cave to the Frozen Lands.

Wolfs. Kill them all and read the Journal on the Barrel. At the end of the Journal you will read the Name Draygan.

Magic Arrows and some Food to get.

Burst Arrows. In another House have 12

Magic Arrows. In the third House is some

Trapper inside and get on second Etage to pick up some

Trapper. Both Chest by the Beds are trapped so destroy it. The right one has 6

Lockpicks. Pick the Chest for 5 Cloaks. You will need it soon, but leave the

Gwani Cloak there. The Note tells you that Hazard, another Trapper, took the

Glass Sword, which belongs to you, to the North. On the Table by the Entrance are a Key and some Potions.