Necklace
Once Iolo is cured and joined you again, talk with Gwenno on Monk Isle and Iolo will give her the Necklace he got from Lady Yelinda back in Fawn.

You can either carry 3 Corpse to Monk Isle or resurrect them here with Hourglass of Fate. Just like Cantra and Gwenno, they have gone mad until you cure them with the approciate Water. 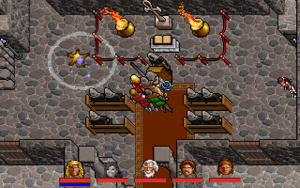 Xenka will soon be back!

Once all 3 are cured. Karnax appear and teleport you to the Altar at Monk Isle if you are not there already, saying Xenka has returned. Talk with her to know what you must do next. you will be given the last

Serpent Tooth for Isle of Crypts. You can drop all Buckets and your 3 Automatons. You don't need them anymore, now you have your old Companions back.

Before going to Isle of Crypts, you need to take all 3 Blackrock Parts and at last one of Serpent Artifacts (Either the Serpent Crown or the Serpent Staff) with you. You will need it on Isle of Crypts. Go there over the Dark Path. 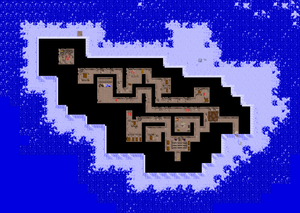 Map of Isle of Crypts 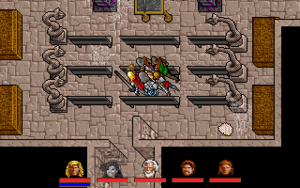 Put any of the Blackrock Part to open this Door.

The Entrance is on the other Side of the Mountain at (12N, 44W). There are several

Spider Silk in entire Cave. At the Room with 2 Paths, take the South one, then the North to find more

Spider Silk. Go South and place any Blackrock Part you have on the Table to open a secret Wall to the South to pick a Chest for

Juggernaut Hammer and a Scroll. Go back and take back the Blackrock Part.

Go Northwest, North (ignoring the Room West as it has only some

Spider) to another Room with Coffins. Push the Button West of the Book to open a Path North. Make sure the Blackrock Balance Serpent is in your Backpack or else you can't be teleported in the next Location. Kill the

Mummy and continue West (The Coffin Northwest has an

Undead which attack you if opened). The Corpse by 2 Coffins have tons of Reagents. Continue and press the Button by the Doubledoor. Open the Door and destroy 4 Traps at every Corner. Continue your Path until the Path ended. Kill the

Mummy and get the Scroll off his Body. Go back to the Room with the Pedestal and place the Scroll on the empty Pedestal. 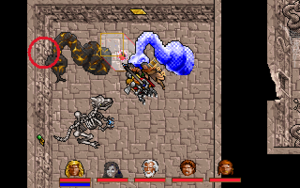 The Chaos Serpent Eye is protected by a Skeletal Dragon.

Chaos Serpent Eye. Now click on North Wall to open a Path to a Teleporter. 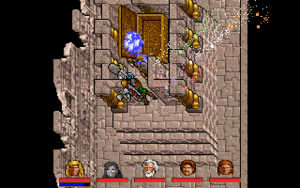 Order Hierophant left to the Void.

Step on it to reach the Tomb with the Order Hierophant. Open the Coffin and cast Summon Shade on the Mummy in the Coffin. You need at last one of the 3 Serpent Artifact (Staff, Armour or Crown) in order to talk with him). He tell you how to restore Balance and you need the Serpent Staff, Serpent Armour and Serpent Crown. He will tell you where to find, if you didn't have it in your Backpack already. He also tell you what happened with the Great Earth Serpent and lastly that you need to reunite the Chaos Serpent first before restoring Balance, but to do that you need to find the Chaos Hierophant, since only he know how to do that, then he disappear into Void. 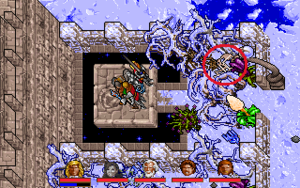 This is where the Chaos Hierphant died.

Go back to Temple of Tolerance and talk with Sethys. He know where Chaos Hierophant last Restplace is. Take him outside and he will tell you where you can find it. After his Death, take the Eye of Serpent from his Body. Go to Temple of Enthusiasm and cast Summon Shade on the Corpse to call the Chaos Hierophant. He will explain some of the History in more Details and tell you how to restore Chaos Serpent. He tell you that you need 3 Prisms with Banes inside and any Blackrock Serpent to perform the Rite in Skullcrasher Mountains, then he too vanish in the Voids, but he will leave a Scroll to you, in case you need to know what to do again. He also give you a Riddle for which you don't know the Answer, so you need to talk with Xenka again to solve the Riddle.

Go back to Monk Isle and talk to Xenka. She will tell you that only a sacrifice from someone in your Party will restore the Imbalance and you lost by drawing the shortest Straw. Go to Monitor and try to sacrifice yourself by pulling the Lever on Crematorium Machine and Dupre will stop you and do it himself. Take

Dupre's Ashes and go back to Monk Isle to recruit Gwenno to replace Dupre. Now go to Shrine of Chaos to reunite the Chaos Serpent.

Note: if Xenka does not give the option to talk of 'sacrifice' after the chat with chaos heirophant, you've got the Xenka bug - it can be fixed by going back to furnace to the room you picked up the serpent staff. Try putting the staff back where it was, walking around all of the room and then picking it up again. This should activate the flag egg to progress the dialogue options.

Inn of the Sleeping Bull[edit]

Everyone is dead, except Wilfried, who can join you and also train you and your Companions, however once he is hurt he will leave the Party.

Like Inn of the Sleeping Bull, everyone but one is dead. Harnna is the sole Survivor in Monitor. Flicken's Body has 99

Bolts and Luther has a Key which open the Door to List Field. Since Brendann and Shazzana have died, nobody can train you or your Companions in Dex.