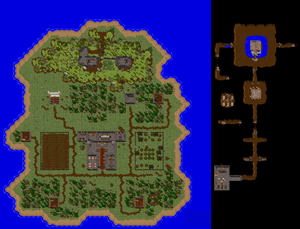 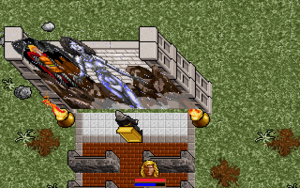 Enter Monk Isle over the Dark Path. Ignore the North Path for now and go South and then up the Stairs. You should read the Book on the Altar to learn more of the Prophecies. There are more Books in the Library as well. Some are in ancient Language, but you can read using the Lens of Translating. Karnax and Thoxa from the start the game is also there. Thoxa will tell you that Gwenno has gone North in the Frozen Lands. If you died once, then you have already spoken with Karnax and he will give you no new Information. "Corn" will tell you about the

Mandrake Root, your main Reason why you're here, where and when you can grab some. There is 20

dried Mandrake Roots in his Hut Southeast of the Chapel at (11S, 153E).

Ask Draxta for a Vision and go to Place of Visions at (7N, 139E). The Vision show how Petra from Moonshade walk on Acid uninjured. That is a Clue for later. There are 3 more nameless Monks who won't talk (Either he is deaf, can't talk or is vowed to Silence...). 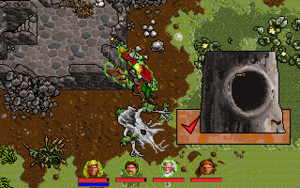 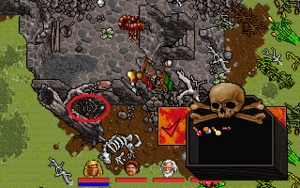 This Corpse has a Key

If the Time for Roots-Hunt isn't right then you should go to Ruins in the Swamp via (18N, 147E). Check the Hollow Tree for a Key to the Basement below the Ruins. Open the Door there and go in the Building in the Middle of the Lake below. There are some Treasure to pick like

Go back up on Monk Isle and ask Corn if the Time is right. If he say yes, then go to Swamp and walk around the entire Swamp to collect at last 3

Go back to Moonshade over the Dark Path. Go to Fedabiblio and ask for Spellbook. If you have 3

fresh Mandrake Roots, then he will start asking you Copy Protection Question.

Stocking
Don't talk to Columna, Melino and Torrissio about Stocking. The Result is that they won't sell you Spells anymore. Columna and Torrissio will also try to cheat you to get the Stocking. You won't get any Reward for returning.

Now would be the time to transcribe Magic Scroll to your Spellbook. Refers to Spells and Reagents for Info on Spells and where to obtain Magic Scrolls. Now that you have a

Spellbook some People will talk with you. Next talk with Mosh about Columna how she have cheated of her Power. So talk with Columna about what Mosh said about her. Buy only Curse, Mass Curse, Energy Mist, Poison Mist and perhaps Invisibility (If you dont wan't to get it later ingame). 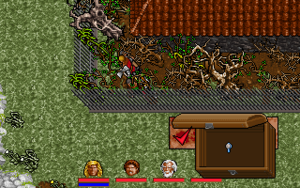 This is where the Comb is.

As for the other Spells from her you can get it cheaper from other People (You can get Locate from Ensorcio for example) and from Scrolls found in game. Talk with Mosh again with a Fish in Backpack and she will ask for it. Give it to her and you will receive a Magic Harp. Tell her also you believe her Story and she will tell you about a Magic Comb Columna have hidden in her House. Click on the North Wall between the Beds in Columna's House and walk in the Garden around to the South. There is a Chest hidden in Trees. Unlock it with the Green Key you found in the Basement. In it's the

Melino is the next on List. The Must Buy Spell from him are: Betray, Dispell Illusion, Energy Field, Mass Awaken and Fetch. All other Spells can be obtained by People/Scrolls. He will tell you some Info on the Tradition about stealing

Serpent Tooth from Mad Mage Erstam by everyone in the City. Gustacio still won't talk to you since he has no Time for you. You could buy Spells from Mortegro now, but if you leave it for later you can buy it for half the Price from him. The only Spells you need from Torrissio is Lighting.

You have nothing to do anymore in Moonshade so you want to leave the Isle. Talk with Captain Hawk about that and he will mention the Catacombs in the Mountains south of Moonshade, but it's closed and only Julia own the Key to it. Go to her and ask for the Key and she will agree to give it to you, but only you find an mean to protect yourself from the Heat in Furnace. So which Mage in Moonshade specialize in Cold-Spell? It could only be Frigidazzi! 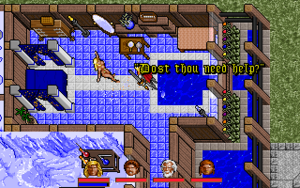 The Dance of Passion

Frigidazzi's House is at (77S, 150E). There is a Key hidden behind the Flower Pot. Use it to the Door on the left. In the cold Room there is a

Magic Scroll (Cold Strike) and some Reagents on the Table. There is more Reagents in the Chest, another

Fire Wand and a Scroll that say she lost a Serpent Tooth she stole from Mad Mage. The Right Door which was locked before is now open. Open the Drawers for

Fur Boots (you will need it later in the cold North),

Magic Helm and Blue Key. Talk with Frigidazzi about Spell and she ask you to come back after Midnight alone to her Bedroom. No need to fire your Friends, they will leave you alone when the Time come. Come back after Midnight to her. She will then ask your Companion to leave. She want more than just talking about Cold-Spells. It don't matter what you do next so you may as well sleep with her.

Next Morning the MageLord will appear in the Bedroom and catch you two in bed. Again, it doesn't matter what you say to the MageLord. He will send you to the Court, where you are found guilty. You will then be sent alone to Mountains of Freedom.

After you came back from Erstam via Dark Path. Frigidazzi is now in her Home. Ask her about

Fur Cap and she will trade it for