Gwani Horn in Vasculio's House. With the Dispell Field Spell you got from Selina's Body you can finally dispell the Field the Horn was in. By taking the Horn the Great Earth Serpent will tell you to rescue Gwenno. Go outside to the West to visit the Gwanis. You see the Number of Gwani has been down to 3 so only Neyobi, Yenani and Myauri survived. Yenani tell you that the Trapper did it and also took the Gwani Amulet with a Serpent Tooth inside which belongs to Baiyanda. The Trapper Hideout is at (69N, 26E). 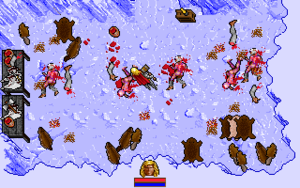 Have a talk with Hazard the Trapper, though he won't listen and will continue slaughter the poor Gwanis. So kill him and get the

Magic Axe and Key off his Body. Take a look in the Room South to see the Results of Hazard Madness. In Bedroom is a trapped Chest and a locked Chest which Hazard's key will open. In both Chests are 2

Filari and the Gwani Amulet. In 2 of the Crates is also 39 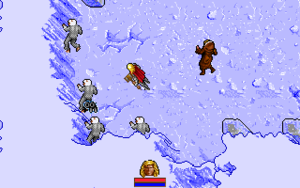 Serpent Tooth which lead to Temple of Balance. Now take the Ice Raft and go to the Death Temple at (95N, 46W). With the Gwani Horn you can destroy Ice Wall and Ice Block, but beware if you are too close to the Explosion, then you will be hurt too. Every Ice Block have a Gwani Body (except the one in the Middle in Northwest which have the Gwenno Body which you are searching for) and some Ice Blocks also have normal Stuff like Armors and Weapons, though the Ice Block near Gwenno Ice Block has

Magic Boots and another Block in East Room has a Regeneration Ring. Free Gwenno from the Ice Block and either carry her Body to Monk Isle or call Thoxa with the Hourglass of Fate to revive her.

Try to talk with Gwenno and the Great Earth Serpent will tell you that her Soul has been twisted by the Bane. Return to Monk Isle and talk with Karnax. To cure Gwenno from the Bane he needs the Scroll of the Serpent from Fedabiblio in Moonshade. So your next Step is going to Moonshade.

Gold Box
With the Destruction of Moonshade there will be Golden Chests appearing in some Houses which have a Serpent Tooth each. 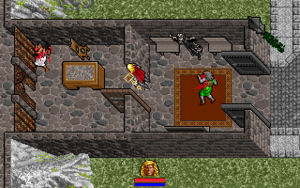 Fedabiblio stoned and other dead.

Once back in Moonshade you will see that Andrio, Freli, Petra, Stefano, Ernesto, Ducio and Torrissio has survived Shamino's Destruction in City. Talk with Andrio and Freli to know what has happened with Fedabiblio and where the Scroll is. In Fedabiblio's House you will see Bucio and Gustacio dead and Fedabiblio turned in stone. Gustacio has a Scroll from Melino that tells you how to repair the Black Sword. Bucio has 20

Philanderer's Friend Wand on the Stone Statue to turn Fedabiblio back. He thanks you and gives you a Key from Captain Hawk and the Scroll you needed, but we will explore Moonshade more before going back to Karnax.

In Gustacio's House is Melino's Corpse which has some Reagents. In the Basement is a

Serpent Tooth which leads to Temple of Ethicality. If you have an empty Bucket, then put it on Altar to get Water of Tolerance, which is needed for later. In Columna's House lies Columna's and Julia's Bodies. Julia has 21

Magic Sword. Columna has some more Reagents. If you didn't get it before, then you should now get Comb of Beauty outside of Columna's House.

Before Stefano's House are Rocco's and Topo's bodies. Rocco carries a Key for the Rooms at Inn. At the Market you will see Mosh and Pothos dead, but Ducio is alive. Mosh has some Reagents. You find Frigidazzi and Filbercio dead in Frigidazzi's House. The MageLord has 88

Lighting Wand and some Reagents. The

Serpent Tooth in Cold Room is the same as the one you found in City of Chaos in Maleccio's Corpse (It lead to Great Northren Forest). Outside of Frigidazzi House is also Flindo and a Ranger Bodies.

Torrissio
Don't talk with Torrissio until you have used the

Philanderer's Friend on Fedabiblio or else he will take the Wand away from you and you are stuck in Game (although you can kill him to get it back, or use vibrate spell).

In Torrissio's House is also another

Serpent Tooth which leads to Temple of Emotion. Torrissio now reign in MageLord House like a King. The

Serpent Tooth in MageLord's House lead to Fawn and is a duplicate of the Serpent Tooth you found in Maleccio's Corpse. Kane's Body is just under the Bridge outside of MageLord House. On the way to Ranger Fort you will find Frigidazzi Goblin Servant dead. Ernesto is the sole Survivor under the Rangers and is glad over the MageLord changing. 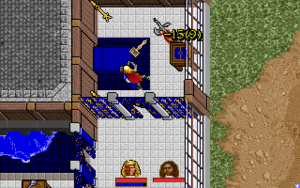 In the Blue Boar Inn are Captain Hawk and Edrin dead. Captain Hawk has a Key. Take it and unlock his Chest. It has a Treasure Map and a Scroll with Hint to how to find the Treasure. Talk with Stefano either in his House or at Blue Boar Inn. He will temporarly join you automatically. He tells you of trouble with Columna. Because he stole the Stocking from Torrissio for the MageLord as Evidence against her. Columna casted a Curse on him, so now a Death Knight is hunting him and Stefano wants you to protect him from the Death Knight. He will promise the Blackrock Order Serpent as a Reward for slaying the Death Knight. He will also give you another

Serpent Tooth which leads to Temple of Tolerance.

Cut the talking with him and the Death Knight will appear near Stefano. Kill it and check the Corpse for

Fire Wand. Talk with Stefano again and receive the Key to his Vault behind his old House (82S, 97E). He will also leave your Party. Now go back to Monk Isle and talk with Karnax and give him the Scroll.

In the Gold Chest in Trapper Hideout is also the

Glass Sword which got swapped with the

Pinecone in the Teleport Storm.

Once you receive the Key from Stefano after defeating the Death Knight go to Stefano old House at (83S, 101E) and unlock the Door behind the House to get the