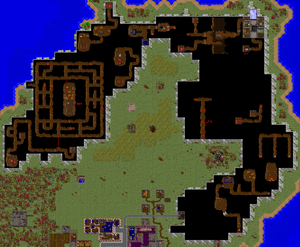 Map of Mountains of Freedom

Before you are sent to Mountains of Freedom most of your stuff are put in a Chest. Only a few items remain with you (If the Avatar have them in his Backpack):

Note: Just before the (autowalking) Avatar reaches the teleporter pad, pause the game by opening the inventory. This will enable you to retrieve all your gear from the chest in the center of the room and take it with you. 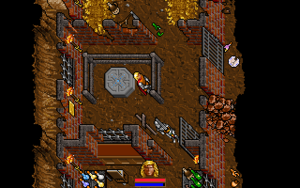 Arrival in the Mountains of Freedom

An Automaton will then explain to you the Rules of the Mountain. Basically if you can flee from the Mountains of Freedom, then you are free from your Charge. Sneak in Automaton Room when he goes out. He will then attack you. Kill him (and take the

Sword of Defense and Red Key from the Corpse) and loot the Room. The Chest can be opened with the Red Key. The Red Key in the Bag on the table open the Prison Door in the North.

Trapper and go through the fake Wall left from the Sign. The Corpse north from the Crossing has a Amulet of Protection. East of the Corpse is a reather well hidden

Gold Nugget. Go West and South and you will be teleported to a Bag with

Gold Nugget inside. Go South, then East, South and East, but don't go far inside since there is another Teleporter which send you back in the Entrance Room. There is a trapped Chest at the Dead End. which has 3 Potions,

Fire Wand, Ring of Regeneration. Go back and go South through the Fake Wall (sometimes there is also a

Naga which is in the Illusion Wall). Pick the Door to the East and fight 2

Stone Harpies. The Chest has 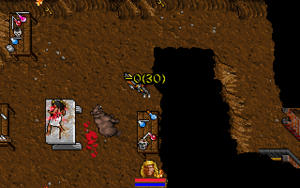 Mage turns into a Bear

The Room with the Barrels have some Reagents (

Bloodspawn is also found there). Go South again and pick more Reagents and

Gold Nugget from Barrel and Ground before picking the Door and step on the Teleporter. The Barrel has some more Reagents and there is only one Path to follow. Open the Door with the Red Key. You will then come in a Mage Room. A Mage appear and transform himself in a Bear and attack you. Fight him until he flee. There are Reagents on the Table. When youre done step on the Teleporter to reach another Place. There you will meet Stefano. He tell you more of Celennia (who is in reality Selenia!) and also that he is a Thief who stole Stuff for his Clients. He need your Help to escape from the Mountains of Freedom and thus want to join you. Agree and go in his Room North. Take the Stuff from the Chest (some Potions, Money, etc). Go East and open Door with Red Key. Clean the Room and take the shiny Golden Key in the Bag on the Table.

A Britannian guard-looking fighter will attack you, wielding the

Black Sword that was swapped for a piece of

Stoneheart in the beginning of the game. It will automatically be added to your inventory, and the daemon Arcadion will ask you to release him. Refuse for now.

Open the Door with the Golden Key. Kill the Female Fighter and take the

Sword of Defense from it and give it to Stefano. Step on the Teleporter and you will be teleported to... 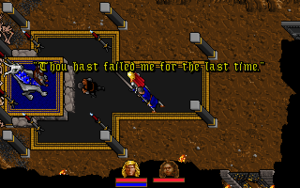 ...'s Cavern. Open the West Door with the Golden Key. You will then go automatically in Room and see a Scene how the Mage from before is there and how Lorthondo kill him and revive him as a

Skeletal Dragon. Lorthondo will then teleported away and leave you alone with the Dragon. Kill it and unlock Door in the South with the Golden Key. Take the

Great Heal Scroll (If you don't have one from Silver Seed, then transcribe this one in the

Firedoom Staff, Blue Key. Use the Blue Key on the other Door. There are several trapped Chest. So destroy the Trap and get Potions,

Click on one of both Lever and Stefano will automatically pull the other Lever. The Teleporter is now active. If you go near it 2

Skeletons will pop up and attack you. Kill them and step on the Teleporter. Go North and destroy the Trap on the Chest. Transcribe

Telekinesis Scroll from the Chest into

Spellbook. Go back and go South. There is a Room full of Corpse with a Teleporter. Some Corpse have some Stuff like: Another

Filari, Sleeping Powder, Ring of Regeneration. The Teleporter will just teleport you back to the 2 Lever-Room so ignore it and go back. Use one of the

Telekinese Scroll you found on the Winch to lower the Bridge. Go over the Bridge and kill the old Man. Go along and avoid the Sleep Field. You come across to a Center with many Rooms and Lever. 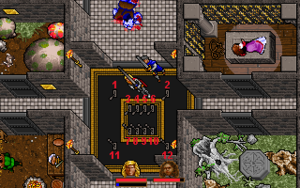 Lever 1 only close you in and Lever 2 open the Troll-Room to the North. Pull Lever 6 and 9 and go in Room with the sleeping Woman first. Leads her to the Nightmare. She will then get killed and the Nightmare will disappeared. Take the Key and Carrot from the Woman's Corpse. Pull Lever 4 to open the Supply Room, but watch out: One of the Barrel is actually a Keg. With the Key you can open the Chest for more Carrot and a Scroll will give you Hints what to do in this Rooms. Pull Lever 3 and drop the Carrot on the plate. Now pull Lever 7 and give the Bouqet to the crying Man. He will then fix Lever 10 and then die. The Dead Child in the Barrel has some

Guilders and a Ring of Invisiblity. Lever 5 open the Rats-Room which has also a Trap. Lever 8 open the Statuette Room. The Chest there is trapped but empty. Lever 10 open the Tree Room. Step on the Teleporter and pull the Blue Lever. Now pull Lever 11 to open the Exit. Not sure what Lever 12 does, but it does something.

Open the Last Door with the Red Key. The Fire will go out and go in the Ring to get teleported again somewhere. This is a Endless Path, you will teleported back at the Start no matter how much you walk. Go South and go East through the Wall and you will then get teleported to an Automaton who will sell some stuff. The trapped Chest in his Room has a

Golden Nugget. The Chest South has a

Great Helm. One of the Crate has 3

Gold Nugget and some Reagents.

You need to build a Crate-Ladder to reach the Bell. You will then telported again somewhere else. You have the Choice of 3 different Teleporter of which 2 are Traps and will hurt you badly. The right one is to the West so go this Way to another Place. Go North and slay

Goblin and take some Potions, Reagents and 17 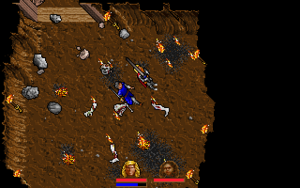 Go West and talk with the Automaton. He will tell you that he have the Key to the Exit and will only give it away if you kill him. Do so and take the Key and another

Sword of Defense off the Corpse. There is also more Potions and

Lockpicks to take. Continue West and you will meet Lorthondo again.

The Black Sword will scream so talk to it. Agree to free him and Lorthondo will die a gruesome Death. Pick another Door to the Exit and step on the Teleporter to go back to Moonshade. 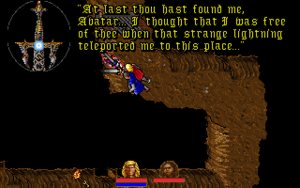 Black Sword is now again in your Possession

After you got the Golden Key go East. You will meet someone who has your

Black Sword. Kill him and you will take the Sword automatically. Say no to free the Daemon in the Sword yet.