There are two character sets used during the events of Ultima VII parts I and II. Note that casting Translation or using a Translation scroll will display the writings in English characters, however they are still written in English even before translation. 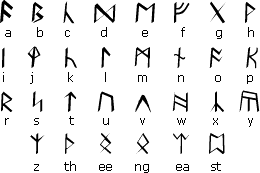 Druidic Runes are found on buildings, gravestones and roadsigns throughout both Britannia and the Serpent Isle.

In Britannia, Druidic Runes are slowly going out of style just like the Virtues; new and renovated buildings such as Fellowship halls have signs using Latin alphabet. Additionally no books are written using these runes, further lessening the frequency of their use.

As well as various serpent motifs and artifacts, the Ophidians used a serpent-based writing system. It is used exclusively on works found in or originating from their ruins. Unlike the Britannians, their books were also written in the runic script.