Preparation for Shrine of Chaos[edit]

You need the Dupre's Ashes, the 3 loaded Prisms and the Blackrock Chaos Serpent beforehand before you should enter the Shrine of Chaos in Skullcrasher Mountains. The easiest way to it is the Dark Path, since the Entrance is just some steps North of the Serpent Gate. 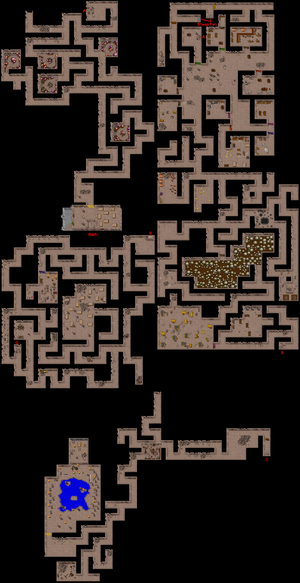 Map of Shrine of Chaos 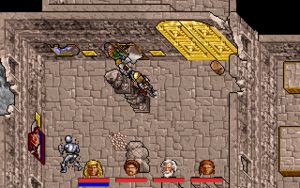 In the Room with the Serpent Gate has another massive Gold Door. Unlike the other Gold Door, this one can be destroyed with Powder Keg. Just place one before the Door and be sure not to stand near it when you click on it. Enter the Shrine and go North (The East Path only lead to a Mushroom Room with few

Rats). Go East to the Corpse in North Nische to find a

Gold Coins. Continue West, then East to find the Stairs.

All the other Paths only leads to Mushrooms with Monster inside or is the longer way to the Stairs. There are several Rooms like Restaurant, Artist Studio, Kitchen, Armory, etc below there. Go downstairs and go South, East all the way and then South to find Green Key. It open the Doors leading to 2 Teleporter. It lead to Sheep Pen near Inn of the Sleeping Bull. There is a Room in South which have 5 empty Chests and 3 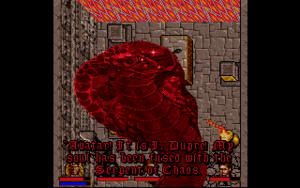 Go back to the Entrance with Green Curtains and go South from there. Go South, East, East, South, West, South to a big Mushroom Room with tons of

It's a true Maze and there are measly 30

Gems to find and tons of

Wildmen. Go West from the Stairs to go West, West, West, North, West and North to the next Stairs. Which leads to one more Stairs upstairs. Unlock the Door magically and follow its Path to a Room with some Corpse. Go Southwest, South, South to a Deadend with a hidden Chest with

Gold Coins. Go North, then West to a massive Gold Door. Just click them to open it. You are now in a Room with a Lake. Behind the Serpent Statue is a secret Door. Click it to get to a Room with 4 Pedestal and an Altar in which a Blackrock Chaos Serpent will fit.

Ophidian Sword and send you to Sunrise Isle for the last Time.

Before going to Sunrise Isle you need to get all Serpent Stuffs and 3 Blackrocks for the Last Stage of the Game.

The only one Item missing is the

Serpent Armor and you are now going to get it before going to Sunrise Isle. 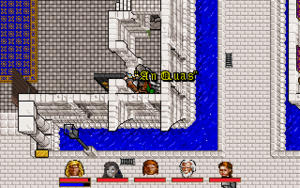 The Secret Entrance to Serpent Armor.

Upon entering the City you will see that it's overrun with Rats and Corpse, but somehow only Lady Yelinda and Ruggs survived. At the Entrance look for Zulith's Body and read the Pergament he has with him. It will mention Serpent Armor and where it's hidden. Lady Yelinda has the Key to it and she is in Gorlab Swamp. Ruggs tell you that Lady Yelinda lost her Diamond Necklace in Throneroom.

Go into Gorlab Swamp with the Comb of Beauty in your Possession and search for a disfigured Lady Yelinda. Give her the

Comb to restore her Beauty and get her Key. Go back in Fawn and look in Southeast Corner in the Palace for a secret Wall to go down. Unlock the Door and the Chests to get

Magic Leggings. Now you got all you need and are now ready to go to Sunrise Isle.