Back on Monk Isle Karnax will explain to you what the Virtues and Anti-Virtues are and how Gwenno can be cured. Gwenno need the Water of Discipline. You need at last 6 empty Bucket in total for all 6 Temples. 5 Bucket to cure your Companions (Iolo, Dupre, Shamino, Gwenno and Cantra) and only 1 Bucket for the Prisms (since it can be used immediately on the Prism, before going to the next Temple and thus alway have a empty Bucket at hand). There is already 3 in Temple of Discipline, so you only need 3 more Bucket. There are some in Chapel and more in Basement. The first Temple you'll visit is Discipline (because of Gwenno) so go there over the Dark Path.

All 3 Temples of Order are in Frozen Lands and their Locations are:

There is one Trap on Altar between Y-shaped Depression, so destroy it and push 2 Button on the Wall nearby to open the Doors to the Stairs. The 2 Automatons in Northwest and Northeast are broken and speak in fragments. Go down the left Stairs. Ignore the Tombs North as there is nothing, so open the Door South and click on 2 secret Walls. You see a invisible Chest and inside it is a Key. Go back upstairs. 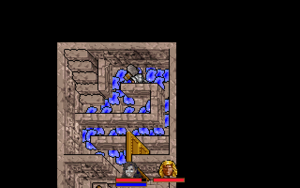 Go up the left Stairs and enter the Library to get some Hints as what to do in this Temple and get the 2 empty Buckets in North Room. Go down and up the other Stairs East. Open the secret Wall South and get the Key and the Blue Y-Shape. Open the Door to the North with the Key from the Tomb and get the second Y-Shape from the Chest. The invisible Chest in next Room has 20

Without Petra
You can also walk through Acid while healing yourself to reach the Fountain.

Go down and put both Y-Shape on the Altar to make a small Bridge to the Middle appear. Go down and get another Key South. North behind the Door is the Acid-Path. Before going back to Moonshade to get Petra, make sure you've read the Body Transference book as well as talking to the automaton in the NE room. Now head back in Moonshade and talk with Petra to join you. Go back to the Temple of Discipline and enter the Westernmost Room and talk with Petra again to let her stand on left platform and press the Button on the Wall and you will then stand on the right platform and your and Petra Minds will then switched. You, as Petra, can now walk without Problem through the Acid.

There is a more empty Bucket. Use it on Basin to get Water of Discipline. You need a second Bucket filled with Water of Discipline. One for Gwenno and one for Dupre later. So you don't need to go through Acid again later on. Go back and talk with Petra again so she join you back. Now leave over the Dark Path to Monk Isle or go to the other Temples of Order. After some Time you will get your old Body back automatically.

Number 7
Instead going East, just continue North and go West through the Wall at the Deadend to find the Corpse of Number 7. Revive him with the Create Automaton Spell to learn who murdered him. 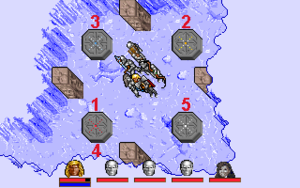 Go West, West, North, North, East, North, West and North to find 5 Ice Block. Use the Gwani Horn to destroy it. There is a Book in the Corpse under the Ice Block, that give you Hints to complete the Temple of Logic. Following the Hint in the Book you need to step on the Teleporter in that Order:

Cantra
Normally you can't cure her with Water of Logic because of a Bug, but with the Mod "SI Fixes" this Problem is solved. 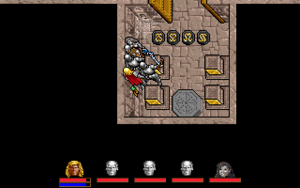 You will then be teleported in Temple of Logic. You need to place The Runes in this Order: BCOW on the Floor before the Door. Talk with all 6 Automaton to hear that Number 7 disappeared and one of the Automaton murdered him and took the Key. Compare their Story to see Number 4 was lying. Accuse him of the Murder and kill him to take the Key. With the Key you can enter the West Room with one more Logic Puzzle. Place the westernmost Stone on the Stone in the Middle to dispel the Energy Field (or you can just use the Dispell Field Spell). Take the Key and open the Door to Fountain of Logic. You need 2 Bucket to fill it with Water of Logic (One for Iolo and Cantra). 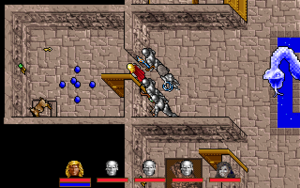 Go to the East. North and South are some Corpse with a Scroll each. It will give you some Hints what to do in the Test to come. Go East and click on the Serpent Carpet. Answer the Question with:

Now you get teleported in a Room. Now you have to do a Test according to Question One. There is a

Translation Scroll in Chest. Go East. In the locked Chest is 34

Gold Nugget and another

Translation Scroll. Go North through the Door and push the Button through the Fire to pass the 1. Test.

In 2. Room behind you is yet another

Translation Scroll in Chest. According to 2. Question you need to drop all Wealth on the Pedestal to pass the 2. Test, but if you go East without putting Money, etc on Pedestal, then you will be hurt by countless Traps in this Floor to the East and you will fail the Test.

In 3. Room fight against Batlin and don't yield to him when you are near Death to pass the 3. Test. Now the Fountain of Ethicality is restored and you get a Backpack with all the Stuff you got in the Test Rooms. Go upstairs Stairs West and fill the Bucket that is near the Fountain with the Water of Ethicality.

Go back to Gwenno and use the Water of Discipline on her. She will be cured and tell you to restore the Balance in Serpent Isle and also capture the Banes again. The only Hint for that is in Moonshade. So back to Moonshade yet again to visit Torrissio in MageLord's House, but before that you need 9 Worm Hearts in your Possession. You will need it to make Worm Gems.

Talk with Torrissio about catching Souls and he will tell you if you give him back the Philanderer's Friend. Once you gave it back, talk with him again to learn that Soul can be imprisoned in Worm Gems and only Ducia can create it. He will also give you the

Create Soul Prism Scroll. Transcribe it in your Spellbook. 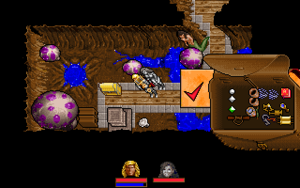 From Worm Gem to bathed Prism.

Go to Market and talk with Ducio. You will learn that you need 3 Worm Hearts to create one Worm Gem. You need 3 Worm Gems for 3 Banes (Iolo, Shamino and Dupre), so exchange with Ducio 9 Worm Hearts for 3 Worm Gems. Cast Create Soul Prism 3x on the Worm Gems to make Soul Prisms. If you already got the Water of Tolerance in Gustacio's Basement (If not, then go there with a empty Bucket), then use it on one Soul Prism. Now you only need the Water from the other Temples of Chaos to enhance 2 more Soul Prism.

Go back to Monk Isle and talk with Gwenno to know what you need to do next. The Prisms need to be bathed in Water of appropriate Temple to hold the Bane, otherwise it will just break free like it was in Batlin Case. You were to 3 Temples of Order. Now you need to visit all 3 Temples of Chaos next.