Helm of Courage from Monitor,

Crystal Rose of Love from Fawn and

Mirror of Truth from Moonshade in the Avatar Inventory, before you can complete the Quest in Dream-Land. 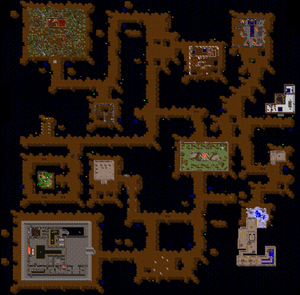 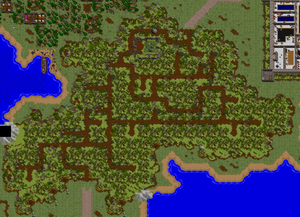 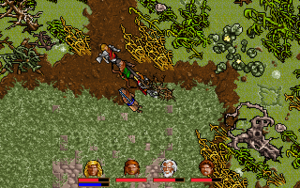 The Entrance to the Swamp.
Cheat
Before entering the Realm of Dreams, you may or may not use this Trick to get the Treasure in the Dream-World.

Now that you have the

Spellbook you can buy Great Douse, Locate, Sleep, Mass Sleep and Vibrate from Ensorcio at the Inn of the Sleeping Bull. Go to the Entrance of the Swamp (47S, 53E) and enter it. You and your Party will go to sleep. It's random where you pop up alone in the Dream World, but you should begin with the Ice House in the Southeast. You will meet Thoxa there who explain to you that you must get the Moon's Eye in the Temple of the Ancient Ones. There is also a

Translation Scroll to pick up. 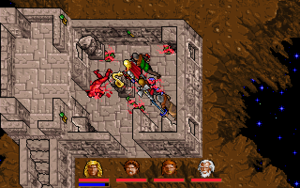 That is how you get the Infinity Bow hidden away.

Go North to a Building with

Infinity Bow. Go West, North and then East to another Building which is Stefano's House, but it's empty (Ensorcio is supposed to torture the MageLord there). Go North along the way to a Ruin. A Wolf Corpse has 2

Sleep Arrows and another Human Corpse has an Invisibility Ring. The Chest behind the Throne contains a full

Magic Armor Set and one more

Infinity Bow. Talking with Lord British will reveal what's happening in Britannia. Earthquakes befall the Land, Emps are dying and the Gargoyles are all sleeping. The End of the World draws near.

Go South until you find the Greenland with a Flame in the Middle. Go West and North again to a Crossing. Go South, West then North to a Chest with lots of

Gold Bars. Go back East, South, South and West. You will find Stefano who is swarmed by 4 nude Women. Go back to the Crossing from before and go North, East to find a Copy of the Inn of the Sleeping Bull where Byrin is. He will give you some Answers to how to leave the Dream World and the History of the Gorlab Swamp. Go West and North. On the way you will meet Iolo who appears suddenly and also quickly disappears again.

Go South from there to meet Cantra again who is going mad from being possessed by the Bane. In her Bedroom is

Lockpicks and a Regeneration Ring. Go back to where Iolo appeared and go West until you finally find Siranush's House. She will explain who the Enemy is and what the use is for Dream Crystals and what you must do. Now you know why you needed the 3 Artifacts.

From the Grassland go South and East to pick up

Juggernaut Hammer. Go South, West then North to another Chest with

Translation Scroll. Go West to the Building and sit down there. You will see Batlin battle a Fake Avatar and triumph over him.

Smith
Behind the magically locked Door to the South is Smith, a talking Horse. A Easter Egg which apperared in other Ultima Games too. 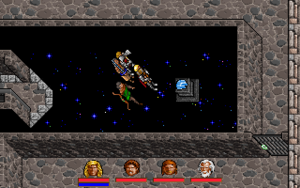 Go back and enter the Castle. You will meet

Rabindrinath and he will try to kill you, but the

Helm of Courage will protect you. If you go near the Chimney the 2 Snow Leopard Rug will come to life and attack you. Go South in the Dinning Hall and go to the Torture Chamber where you try to talk with

Rabindrinath, but he will try to kill you again, but fail because of

Crystal of Love. Take the Key from the Corpse on the Table and

Fire Sword from the Corpse in Cell. Go back to the Hall and unlock the Door to the Bedroom, where

Rabindrinath will try a third time to kill you, but

Mirror of Truth reflect it yet again and he will die. Take the Key off his Corpse. In the Chest in Lab is another Lighting Whip. Unlock the Door to the Dream Crystal with the Key from the Corpse and take the Dream Crystal.

Now go back to Siranush and give her the Dream Crystal. If you used the Serpent Bond, then you should give your Stuff to your Companions. Siranush will see Edrin one last time before she destroy the Dream Crystal and send you back in the Real World. You will also receive the

Serpent Necklace. The 3 Artifacts are now pretty worthless now the Adventure in the Dream World is over, except maybe the Helm of Courage.

Jewelry and a Regeneration Ring. Continue North to exit the Swamp and enter the Great Northern Forest.

If you have the Letter from Freli, then go to Delin in Fawn and deliver it to him. In doing so you get an offer to buy his stuff for half the Price. 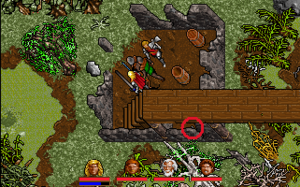 Where the Key is.

Gems. Both Bridges leads to Swamps. The West Side has Healing Fountain and a very well hidden Key. The East Side have some lousy Armor.

Fire Wand along with some Money and

Gems. Go in the Red Gate which are protected by some

wingless Gargoyle. Push the Button near the Door to get 16

Jewelrys and some Serpent Weapons.

There is Stairs at (54S, 73E) leading below. Go down and go through the Fake Wall South to another Stairs up in a sort of Prison. In the Passage below are some