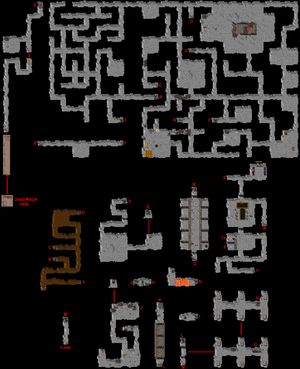 Aram-Dol's Lair is a confusing maze combined with traps and some fairly tough monsters, culminating in one of the hardest boss fights in the game.

Before starting, it is vital to have at least one of these: 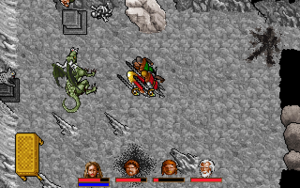 Draxinar can you Riddle to solve.

Past the gate and monk Solaria, there are several stairs leading downward into a maze of passages. One leads to an amiable dragon, while others lead deeper into the cavern. The fastest way to the Lich is the northeastmost stairway.

Arachnians on this level. These spider-like creatures carry bows and magic arrows. Magic bows and crossbows are the best way to kill these creatures.

From the stairway, head Eastward then Northward to reach a decrepit structure in a large room. Inside the decayed building lies a stairway leading further into the depths. Quickly run past the Arachnians and take it to reach the "basement".

Enemies
Most enemies in this area are weak Undeads, Mummies, Skeletal Dragon or Suit of Armors.

Head Northward; there are some locked doors and an open one to a portal; take it.

Head West and North, grabbing a key hidden behind a pedestal; take the fork to the right to unlock a gate with said key, then go down and flip a switch; head North from the fork and watch out for traps; there is a hidden wall behind a massive slab of stone, a key is found there; head Eastward down some stairs, unlocking a door and heading down again.

In the next area are a set of switches and buttons. A scroll tells the Avatar to throw down two at the first button, three to get eight at the second button, and four to get twelve at the third. Fairly to throw the switches incorrectly could result in instant death. 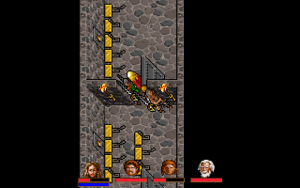 Helpful Hints to how to solve the Puzzle.

Past this puzzle, go through the stairs to enter a hallway. This hallway will repeat endlessly, so the Avatar must hug the East wall to find a hidden entrance. Inside are some

Mummies and a green key embedded in a wall. There is a locked door leading to a set of stairs, but don't take it just yet. 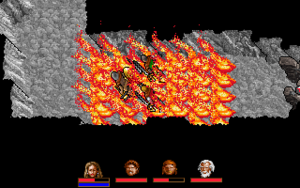 In one Northern alcove, a hidden wall leads to another mummy-infested area. A set of stairs leads down to an area filled with fire fields. Those are fake; pass through them and retrieve a key. Head all the way back to the locked stairway, unlock and go through it.

Continue through this room, unlocking a gate and passing through. Here lies the only real threat in this area:

Skeletal Dragons. These undead dragons cast spells, but shouldn't be too much trouble for a moderately powerful team. Fight or run past them to an Eastern alcove; search the Northern wall for a hidden pathway and go down a flight of stairs.

The resulting room is filled with switches and Suit of Armors in cells. Approach one cell door and it automatically opens. Kill the

Suit of Armors and flip the switches. Flip the golden switch in the center of the hallway once all cell-switches are flipped. The final door to the Lich is now opened. 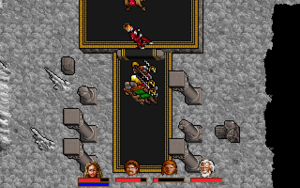 Aram-Dol is one of the strongest ever!

Aram-Dol the Lich is possibly the hardest enemy in the entire game. He opens the battle by casting Fire Ring, causing massive damage to the party. The Lich casts Invisibility on himself and is immune to most status effects such as Sleep and Paralyze. He also scuttles around, making melee companions less effective.

However, the are several strategies to dealing with him.

As Aram-Dol jinks about, archers are the best ones to attack him. At least one melee character should attack Aram-Dol, though, to occupy him and absorb damage. An extra magic bow can be found in the Fiend's Domain. Any magic wands the party obtained could also be used.

However, the Avatar will need at least the Reveal Spell to fight Aram-Dol this way. Healing can be performed with bandages or potions, but the only way to counter his Invisibility is with magic.

Their use is obvious, but some players may fight Aram-Dol early or forget to purchase one in Moonshade.

Due to the Vibrate Spell's function, magic-casting enemies drop their spells, resulting in a completely disarmed Lich.

In the Outpost, there is a hidden entrance in the Iron Maidens of the dungeon. The Avatar must "use" the Iron Maiden to reach the hidden room. Inside the room are some powder kegs. Five exploding kegs should put Aram-Dol at the point of death while six should outright kill him.

The kegs are heavy, but each character can take turns wearing the Belt of Strength, pick up a keg, then hand the belt to another character. Thus, the characters will be overloaded, but will suffer no ill-effects. 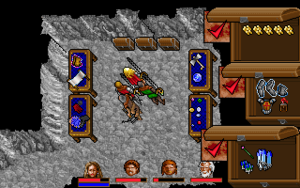 But the Reward for defeating Aram-Dol is so worth it!

Aram-Dol carries two keys. One unlocks the door to his storeroom which contains the

Magic Bolts, some Reagents and some

Magic Armor. Don't forget to take the Blue Orb, which is the Reason why you're here. Take the teleporter to exit the room; unlock the door and backtrack out of the cave.