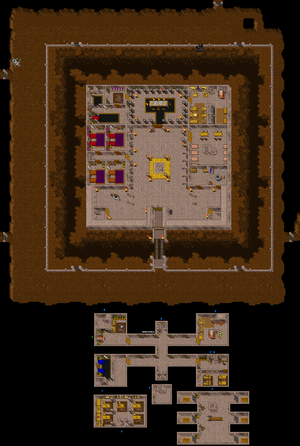 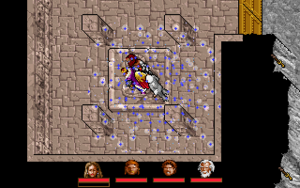 Go through Serpent Gate to Silver Seed.
Achieve Immortality!
For the duration of your stay in the past Surok the healer will resurrect you when you die. You will become permanently immortal if you kill him. See Secrets for more on this.

Upon your arrival, head north into the Banquet Hall and talk to the cloaked automaton. He proclaims you the Champion of Balance. Be sure to use all the conversation options he offers, and eventually he'll give you a magic keyring.

This is a very useful device. It makes hunting for the right key obsolete. Once you have it simply press K and then click on a door or chest, and if you've added that same key to the keyring the lock will open! What's more it will never become heavier or take up more space as you add keys to it. To add a new key merely drop it onto either the Avatar or his HUD icon and it will be absorbed into the keyring. Sometimes keys refuse to be absorbed automatically, which means you'll need to double-click them and then use them on the keyring. The only keys that will never fuse with the keyring are the Keys of Fire and Ice, because they instead fuse with each other. After they have done so, however, you can then put the resulting Blackrock Key onto the keyring.

Isstanar will also tell you that to prove yourself as the Champion of Balance you will need to acquire four magic Orbs from the surrounding dungeons. However legions of Chaos monsters lie between you and the Orbs, not to mention an array of puzzles. 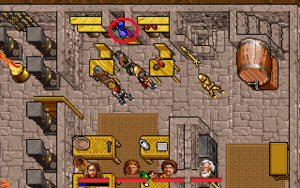 The Key is behind the 2 Flower Pot. 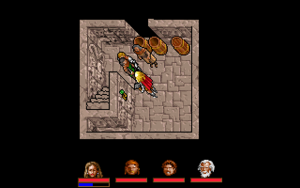 Open the Wall and use the Key besides the Flower Pot to use the Shortcut to Aram-Dol Lair.

There is a shortcut to Aram-Dol's Lair. First go in the Kitchen and move away the 2 Flower pot and take the partially hidden Key, then go in Basement where the Room with 3 Barrels are. Move the Barrel away and click on the Wall behind it. Go through it North and use the Key on the Door.

From here you can go to one of several locations:

Once you have all four Orbs, you can finally retrieve the Seed.