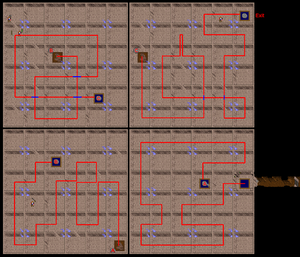 Map of Issik's Maze
Free Party EXP
You want some free EXP for your whole party? Forget what Drusilla said. Go back out and make them all rejoin. Everyone who completes the maze gets 1000 EXP, so there's no reason to leave them out of it.

North of the Outpost you'll spot a hollow tree. When you reach it a woman called Drusilla appears and provides assistance. She claims you must traverse the maze alone because if any more than one venture in all will become hopelessly lost. When you head on into the maze your belongings will disappear and your companions decide it's best to wait outside until you complete the puzzle. 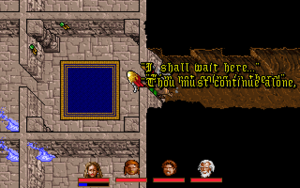 You will automatically enter the Maze alone.

Once you cross a threshold that room's doorways will adjust accordingly. You'll sometimes need to backtrack to trick rooms into providing the right openings. If you get stuck (all four exits will be blocked and the music changes to a more despairing tune) you'll need to kill yourself using the blue fire in the corner, but if you reach the Teleporter on each Level, then all Exits will be open forever and you can walk around freely.

Head left, then down, then left twice, then down again, then right twice, down again, left four times, up, right, up, left, up three times, right five times, down, left two, and finally down. Step on the teleporter to proceed. 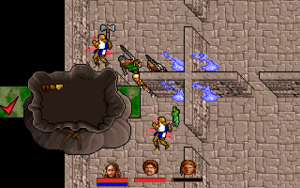 Get the Cheese for Yurel later on. 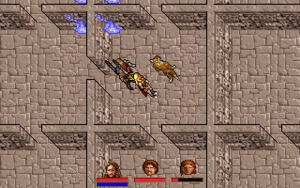 Head down three rooms, right three, and up two. Talk to the cathuman here and give him the cheese you found earlier. In gratitude he gives you the Purple Orb (the "ball" he was talking about). If you don't have any cheese continue on and fetch him some from the corpse on Level 2. Anyway, continue up, left, up, down, left, down two, right for four, down, left, up for three, right, up, left twice, up, right, and search the corpse for the

Helm of Light. This provides eternal daylight AND counts as warm clothing when in the frozen north. Simply equip this on someone's head or even in their hand to make use of its power.

Now simply head straight through the right-hand wall to the teleporter. This takes you back outside. Look in the hollow tree and retrieve your equipment. If you leave any of the maze gear behind be careful not to discard the Orb!