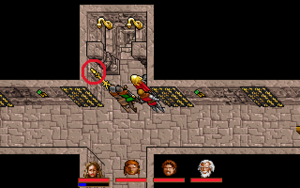 The Button is behind the Candlestick. 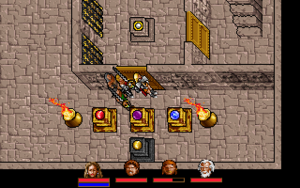 Which Orb belong to which Pedestal.

Once you have all the orbs, return to the keep and go downstairs to where the mage is brewing potions. Head to the right and look for a lone candlestick. It is hiding a button. Press it and return to the lab to find a staircase behind the wine cask. Go down the stairs and follow the path until you reach four pedestals. You can see the Seed right through the door there. Place the Orbs on the pedestals in this order (from top left): Red, Purple, Blue, and Gold on the bottom. If you place one on the wrong pedestal it will make a hissing noise and grey smoke will come out, whereas if you succeed it will become blackened. Once all four have become blackened the door will open. Go in there and pocket the Silver Seed. Those three witches will appear and try to turn you into something dreadful (notice they mention the Guardian?) but the Amulet shields you. Kill them and take the keys, then head up the stairs. Those keys open three doors on your way to the area where you will plant the Seed. 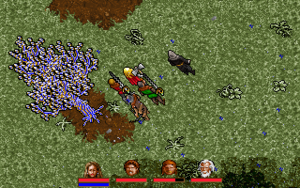 The Silver Seed grow incredible fast to a Silver Tree.

Karnax now appears and advises you. He says the waterfall will feed the Seed, but don't attempt to plant it there; instead, place it in the little hole on the patch of earth below the waterfall and then double-click it. The seed will quickly sprout into a magnificent tree.

If you have already released the Banes, Karnax will go on to say that the tree will help the monks restore the damage they did, making the ending seem less depressing than it was pre-expansion. This won't happen if you finish The Silver Seed before the Banes have been released.

Now you can return to the present. After the Tree grows the Amulet of Balance no longer needs charging, so you can leave right away.