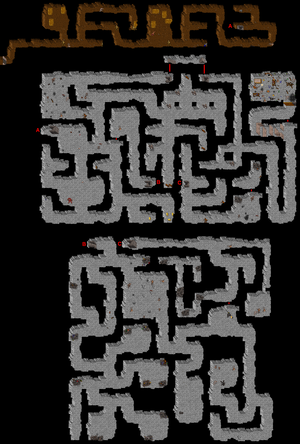 The Fiend's Lair is right from the Keep and it's where the mad Fiend live. It's also the Home of one of the most powerful Item there is: The

Ring of Reagents (which let you cast Spells without Reagents!).

Open the Gate and to the Stair. There is only one correct Path to it. So that shouldn't be hard, but the Way to the Stair is filled with

Acid Slugs so fight your way to it. In the Long Path just before the Stair there is a Trap to face.

From the stairway, head South then west to pick up 7

Lockpicks. Go East to find 4 trapped Chests which will explode if you clicked it or tried to unlock it. Go North and pick the Chest for 6 more

Lockpicks. The Wall besides the 2 Skeletons is fake and the Skeleton behind the Wall has a Book which tell you about Traps in the Lair.

Ignore the Fake Wall for now (but remember it for later, since you will come back here.) Go North left of it. The first West Passage only lead to a bunch of

Headless. The East Passage lead to some

Suit of Armors which comes to life if you come near it and there is tons of hidden Trap on Ground and there is no Treasure for you.

The second West Passage have also a hidden Trap: Sleep Field. So perhaps you want to go around by the first West Passage. The last Passage have also a very visible Trap. So try to avoid it and get to the Stairs. Go down and up the other Stairs. Go South, but beware as there is one Fire Trap here. At the Crossing go East along the way until you come across a strange Path leading west with different Wall. Don't go through here as its trapped with Explosion, so go North through the Fake Wall and pick the Door. Behind the Door awaits a Human names The Fiend or under the old Name Shal. 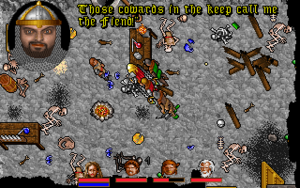 The Fiend want the Ring of Shal.

You can kill him without warning or you can talk with him. He want you to retrieve the Magic Ring for him. You can accept it or annoy him to attack him. You can also ignore him and never come back here ever. It's optional. He is not so tough as Aram-Dol so pound him good or alternative you can use Sleeping Powder on him and kill him in his Sleep.

Searching for the Orb and Ring[edit]

Remember the Fake Wall i told you about? You can just start going for the Orb and Ring without going to Fiend, since there is only Traps and Enemies and no Treasure. Go down the Stairs and go West.

Wildmen lives here. It's a Deadend, but there is some Treasure to grab like a

Fire Wand in a Chest, some Reagents (but with the Ring of Reagents, this become useless), 3 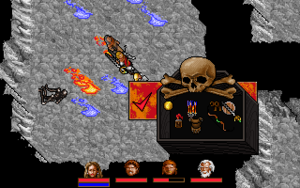 Searching for the Gold Orb.

When you're done, then go East and collect

Lockpicks from the Rubble. Go through the Corpse Room until you see

Gold Coins on the Ground. Go South in the Room, but beware there is another Trap. Search the Black Corpse for the Golden Orb. It also contain a

Magic Helm and some 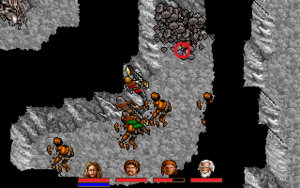 The Ring can be hard to find.

Go back and go North on the Gold Coins Trail. You see another Black Corpse and a Sword-Trap. Don't bother continue East, since there is nothing to grab but some Monster like

Gazers. Go North from the Black Corpse through the Fake Wall. Going West only lead to a Deadend and when you're there, then there will be a Earthquake and the Way back will be closed, but you can destroy it with your Weapon, so it's not the End of the World. So continue North and then West to the Stairs. Go up and go South, then East. Go North through the Fake Wall and remove the Rubble to get the

Congratulations! You have found the Ring of Shal or also called Ring of Reagents. Its let you cast Spells without wasting any Reagents. With the Golden Orb hopefully the last of the 4 Orbs you need to go back in the Keep to retrieve the Silver Seed.