Ultimate Spider-Man/18 and Over 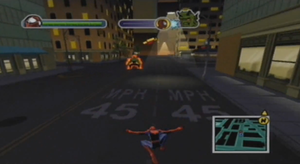 Stop chasing Goblin once he stops and focus on dodging his attacks.

The chapter will start off with a chase. Go after Green Goblin before he causes more havoc. Follow him a bit and the Goblin will stop to throw some fireballs. Dodge them by stopping whatever you're doing (web zipping/swinging) and simply jumping out of the way using Spider Sense. Dodging them without Spider Sense can be a bit tricky, them being homing fireballs. Goblin will continue on shortly afterward and, after a little more chasing, will stop to attack again. Don't even bother to try and attack back (there's no health bar for Goblin yet and the fire makes him invincible anyway) and just dodge the attacks. Then when he continues, follow him again. Goblin will stop a third time in a parking lot, a fourth time by the docks, and then eventually stop to punch down a billboard. Your new goal will be to save the civilians by lifting up the parts of the billboard while avoiding Goblin's fireballs at the same time. Do this by jumping immediately after you save a civilian. Save the three and then Goblin will continue, but not for long. A cutscene will stop the chase and begin the battle. 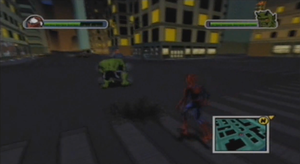 Attack while Goblin is burnt out.

The battle against the Green Goblin takes place at the Latverian Embassy, but starts out on the street. This fight can be very challenging if you have problems dodging attacks. The fight starts with Osborn jumping at you, so dodge instantly. Now at first Osborn has three attacks: a simple punch/claw (for close range), a jumping attack that sends a shock wave of fire along the ground and his "Fiiireee!" attack. Simply dodge the jumping attack when he is about to land and start using some combos on him when he isn't on fire. After about 4 hits you should probably move away and expect his "Fiiiree!" attack to come next. During this attack you cannot harm him. He will either throw 1 or 2 fire balls at you which you need to dodge while standing still. After this, Goblin is left vulnerable to a combo (it is recommended to use adrenaline as your special). Smack him around for a bit while dodging at every chance you get until he breaks in to the embassy. Now he will go after civilians at the far right. Before he gets there, start attacking him to get his attention off them and swing to save them both. Now Goblin will up his game a bit and introduce a new move where he jumps and throws fire balls. This is nothing too threatening. Simply move out the way and wait for your time to strike. The "Fiiree!" move comes more often now (especially when you get close). Just get that special meter up and adrenaline rush him to death.