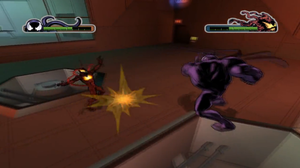 Use Venom's tendrils to knock Carnage down.

This is the hardest boss battle of the game: Venom versus Carnage. Carnage will pretty much hit you every chance he gets. He is much like Venom in the way he uses his tendrils and extending arms to hit you from anywhere; the only place your safe is the ceiling. It is recommended to attack him from long range because you usually will be able to get a nice 5 hit combo on him before he has a chance to recover. The whipping combo that is used is the one where he spins hitting everywhere with both tendrils and his tongue. After this combo, jump on to the wall and crawl up to the ceiling. Crawl across the roof to the middle where a black line is, then fall to the ground and quickly start whipping again. He should use his diagonal attack and miss you on the fall leaving him open for a beating. Try not to get too close or he'll use his combo breaker where spikes flail from his chest. It's a hit and miss strategy since sometimes he'll extend his claws to hit you while falling from the roof, but it usually works well.

Once he is knocked out you must approach him and eat him. The touch screen eating technique doesn't work because Carnage is too powerful to just pick up and move around freely (Nintendo DS version).

If you find all of this too hard, there is a cheat for Invincible Venom in the cheats section.