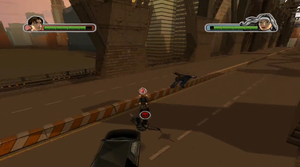 Take out the thugs first.

This boss battle starts with Peter Parker fighting Silver Sable. One of the most annoying parts of this battle is her thugs with tommy guns. Quickly knock the thugs out so they can be out of the way and you can focus on Sable. She'll be doing a lot of shooting and flipping here, so this battle can be a bit tricky when you're trying to dodge bullets and land combos on her at the same time. When the spider sense goes off, run towards her while dodging the starting a combo. It may work best if you keep the combos simple (all punches or kicks) because she seems to move less that way. Whenever a guard with a gun shows up, take him out quickly.

After you knock down Silver Sable, a cutscene shows Peter Parker trying to land the finishing move on her only to get countered and kicked onto the other lane of the bridge. A car swerves off of the road in an attempt to miss Peter (though he's able to dodge by flipping over the car anyway) and is about to slip off the bridge. You'll no longer be fighting Silver Sable here - you'll be working with her. Peter will have to hold the car and keep it from falling off the bridge while Sable opens the doors and pulls the citizens out. Three more tasks will present themselves to Peter: one where you'll have to save a citizen from a burning car that's leaning on another burning car, a burning car which you won't need Sable's help for (just open the door), and a citizen hanging from a higher part of the bridge, one which you'll have to wall crawl to reach.