You'll start off the game by fighting Venom in a tutorial level. This comes off as a boss fight, but really doesn't seem to be. Control tips will show you what moves to perform. Start off by punching Venom with

Q and kicking him with

E. Do both and a "good!" will show up at the top of the screen, and then another tip will come up, this one being about spider-senses. When spider-sense appears, press and hold

Space to dodge the attack. Once again, the "good!" come up and you'll be left to continue the battle on your own by using punches, kicks, and spider-senses. Eventually, a red arrow will show up above Peter telling him which direction to go to. Follow the arrow to the green beacon of light. A cutscene will follow, which ends with Venom feeding on Peter. 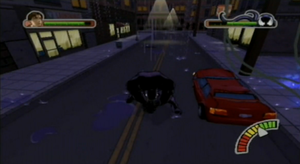 You'll have to escape Venom by pressing

alternately and rapidly. A meter in the corner will show your progress. Get the tick marker to the end of the green area and Peter will be able to escape Venom. You'll notice that this has regenerated some of Venom's health. This is how Venom regains his health - by feeding on people. After you escape, the fight will continue. Punch, kick, and use your spider-senses until Venom's health is fully-depleted. The cutscene that ends the chapter will then roll, showing Venom's supposed death by electrocution. Meanwhile, Peter escapes and the chapter will end.