The chapter will start off with a cutscene of Venom feeding on a jogger in the park at night. The scene will then skip to a dark alleyway, where you'll be in control of Venom for the first time. This chapter serves as a tutorial level for Venom gameplay. It's pretty short and it should be easy if you've gotten the hang of Spider-Man's controls. The first tip tells you how to leap: press

to leap great distances as Venom. Like Spider-Man's jump, the longer you hold it, the farther he'll go. Get to the next few beacons and you'll get another tip: press

E for a tentacle attack, and 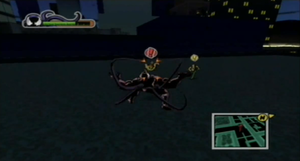 Feed on people to survive as Venom.

After you fight a few people on a roof, get to the next beacon and you'll be told the most important tip about Venom's missions: feeding. Feeding is absolutely necessary when you're playing as Venom, as Venom's health will be constantly depleting and feeding on people is the only way to regenerate it. To feed, hold

. The longer the button is held, the more energy Venom will receive. You'll have to practice on a little boy holding a Spider-Man balloon, the perfect target. All you have to do is feed on him and the next tip will come up. Press

to pull yourself towards buildings with Venom's tentacles. Get to the next beacon and you'll get a tip about wall crawling: press

F while walking towards a wall to climb on the wall.

Follow the beacons and feed and you'll get a tip about throwing. You'll have to get close to the motorcycle with the glowing blue rings and use

F to throw it. This will immediately start the next chapter, Hell of a Mess.