Ultimate Spider-Man/Like a Rhinoceros, but Bigger 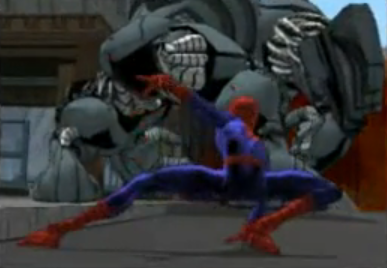 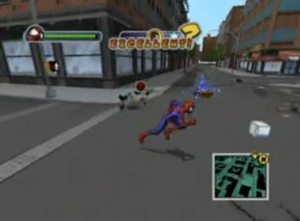 Chase R.H.I.N.O. and fight crime at the same time.

The chapter will start off with a news report talking about the loose criminal R.H.I.N.O., with Peter Parker having no choice but to leave Mary Jane for a while and stop the damage. Donning the suit, Spider-Man goes to the location of R.H.I.N.O.'s destruction to see that he has a lot on his hands. This chapter will be all about chasing R.H.I.N.O. and saving civilians, so don't expect much else. Swing to the first beacon of light and the action will begin. A working civilian gets caught in a mess of electricity. Swing over to him and pick him up, then take him to the ambulance as directed. When he's brought to safety, drop him and continue the chase to R.H.I.N.O. Don't expect to move far, however, as another civilian gets trapped in a burning building. You'll then be told about interacting with objects. Stand near it, tap the directed buttons rapidly, and the civilian will be free, allowing you to move on.

Keep following a few more beacons until you see a civilian trapped under a car. Lift the car up before it explodes, then take the civilian out of the pit and drop her at the nearby ambulance. Afterward, lift the car that just recently exploded and then move on. The next cutscene shows the failed attempt of the police officers to stop R.H.I.N.O., and Spider-Man comes on the scene only to have the same fate. He's pushed aside by R.H.I.N.O. and the chase continues. R.H.I.N.O. then makes a path through a building and a cutscene shows him throwing a car aside. The car, now jammed in a building, has a civilian trapped inside. Save the civilian by wall crawling and then bringing him to a nearby ambulance. Continue the chase to be stopped again. Help the police officers by beating up the thugs, then follow R.H.I.N.O. again. Reach the green beacon of light and the chapter will come to an end, immediately starting the next chapter, Inexpugnable.

[Go to top]← Hell of a Mess | Like a Rhinoceros, but Bigger | Inexpugnable →